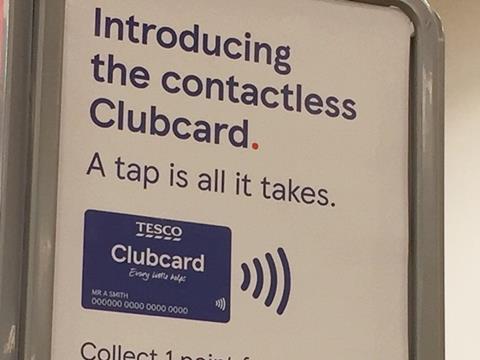 Tesco’s launch of a contactless Clubcard has hit a hitch amid complaints from cardholders that millions of new key fobs are not compatible with the technology at the till.

Tesco launched a contactless Clubcard last month and urged its 17 million users to discard their old cards and key fobs to make way for the new contactless era.

But the fobs, used by many shoppers as an alternative to the card, have left staff having to manually scan points.

Tesco this week insisted the fobs were never intended to have been contactless - just the replacement main cards. There were no plans to make the fobs contactless, it added.

Yet in its promotion for the contactless card, Tesco uses the line ‘a tap is all it takes’ and lists ‘card, mobile app and key fob’ as ways the new Clubcard, intended to make the loyalty scheme more interactive with customers at the till, could be used.

There was some confusion on Tesco’s social media channels as it had to explain to shoppers that the key fob-sized devices were not contactless.

One shopper asking why the fobs did not work was told: “We are working to resolve the issue as the key fobs are not being read. Please use the standard Clubcard in the meantime.”

But another got the message: “I can confirm that the key fobs are not contactless, only the main Clubcard is contactless. I hope this helps.”

Hi Graeme, the Key fobs are not contactless but you can still scan them at the till #HopeThisHelps - Julie

Utter #fail from @Tesco - sent an unwanted #Contactless @TescoClubcardUK and the QR code on the key fobs won’t scan on checkout machines!


A Tesco spokesperson said, “We’ve identified an issue where the new Clubcard key fobs are not scanning at a small number of our self-service checkouts. We’re working to fix this issue as soon as possible”