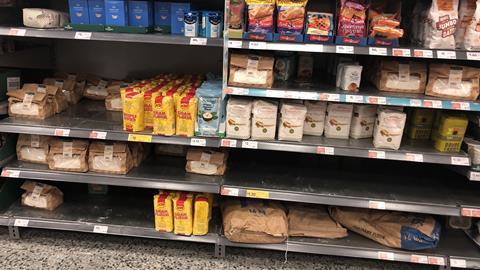 Coronavirus availability: which supermarkets have the best stocks of flour?

Having struggled to maintain supplies of toilet roll and hand sanitiser amid panic buying at the beginning of the coronavirus outbreak, supermarkets faced a shortage of flour last month after locked down Brits turned to baking en masse. So what’s the latest situation? And which supermarkets have the best stocks? We teamed up with asset checker Shepper to find out

Supermarket shelves are still looking decidely empty of flour. Despite millers working “round the clock” to double the production of retail flour in an effort to meet the surge in demand during lockdown, supermarket availability was at just 29% in May, Shepper’s data shows.

Morrisons is the worst affected, it suggests, with availability of flour at just 22% in the Morrisons stores included in Shepper’s audit. Asda also has relatively low availability at 24%, while Sainsbury’s is at 29%.

While shoppers are still faced with shortages of flour in supermarkets, availability of other in-demand items has improved significantly, the data shows.

Ahead of lockdown, availability of toilet-roll, hand sanitiser, pasta and paracetamol was below 10%, while there were also shortages of UHT Milk, tinned food and frozen food as anxious Brits filled their cupboards.

But supermarket stocks of most of these panic-bought items appear to have recovered in recent weeks.

The biggest improvement is on toilet roll. Back in March, UK supermarket availability of toilet roll was at just 3%. By May that had improved to 75% across the 500 stores audited by Shepper’s network.

There is also significantly more pasta on supermarket shelves, with availability up from just 5% in March to 68% in May, while availability of UHT milk, rice, tinned food and bleach are all now over 60%.

Availability of panic-bought items has improved across all of the major retailers, most of which introduced temporary purchasing limits on items and changed opening times to manage stock.

Tesco, which introduced limits of two items per customer for the most popular products, has seen the biggest improvement. Availability was at 71% in May, versus just 21% in March.

Asda, meanwhile, currently has the lowest availability of panic-bought items according to Shepper’s data – although it has still significantly improved from 17% in March to 57% in May.

“It’s interesting to see the innovative ways in which UK supermarkets have responded to stock availability challenges during Covid-19, such as selling flour from their own bakeries,” said  Jan Vanhoutte, co-founder at Shepper.

“Store management performance has been a big part of the now improved stock availability on panic-bought products, as where stock levels are high in one type of product, they tend to be high across most other products, suggesting an indication of store management rather than supply.

”Supermarkets have been agile, inventive and resilient during this challenging time, which is a testament to an industry that is over 70 years old.”