Inside the checkout-free Sainsbury's Clapham 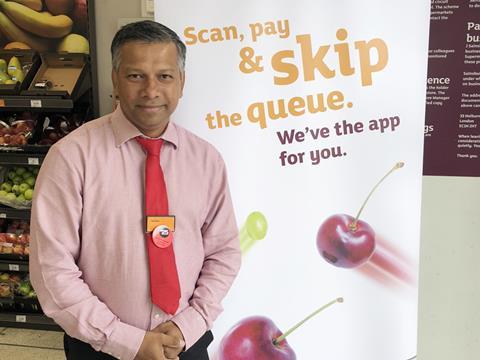 It might be a dreary afternoon on Clapham High Street, but something fun is going on inside the Sainsbury’s Local. The supermarkets have spent years trying various queue-busting techniques, but in this store the latest incarnation of the Sainsbury’s SmartShop app all but eliminates them completely.

Customers walk in, scan items on their iPhone (not Android yet), pay for them via Apple Pay and leave. No need for chit-chat or a self-checkout. And it works perfectly.

Open the app and it latches on to your location. Scan a carrier bag from a stand at the entrance to the store, unless you have brought your own. Then pick up an item, scan it with your iPhone and bag it.

There isn’t anything especially revolutionary about this part. Sainsbury’s has been trialling scanning on smartphones since 2015, but with payment still made at a checkout. Now you do that part with your phone, too.

“No more machines, no more queuing, it’s really easy and we are the only store in the entire country using it,” store assistant Jon is telling a customer. “I’m saving you time and effort. You’ll walk past everyone else, past all these self-checkouts, and then you leave the shop. How easy is that?”

And people are listening. For half an hour, every single shopper makes genuinely encouraging noises.

“Quite a lot are getting into it,” says store manager Sekhar Dey (pictured). “Customers come in and ask: ‘Can I just scan my goods and walk out?’ I say ‘Yes, you can’ and they say ‘That’s brilliant!’”

Sainsbury’s says the app has been downloaded “hundreds of times and used in hundreds of transactions” and feedback has been “overwhelmingly positive”. 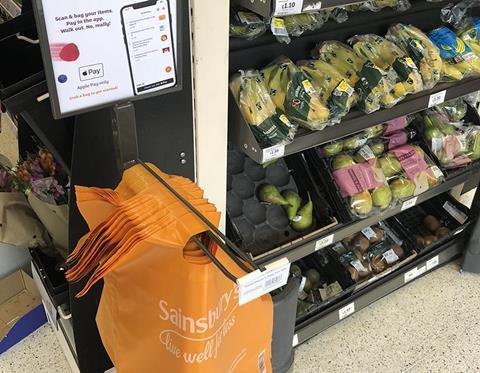 There are some limitations. Alcohol and tobacco need to go via the usual checkout for age verification, as does paracetamol. But the technology has been glitch-free, says Dey.

“At first a couple of customers said the app was running slowly, but the technology team in Holborn sorted it out quickly. And more features will be added.” Customers would be able to scan and buy alcohol subject to an age check by a staff member.

Even if it works perfectly, opportunist thieves can be tempted to take advantage of existing self-checkout technology by ‘mis-scanning’ pricey avocados as cheap potatoes, for example. What about SmartShop? Has Dey been hit by a wave of shoplifters? He says it’s too early to say.

A Sainsbury’s spokeswoman said: “While Sainsbury’s does not expect a rise in theft, it will increase the number of cameras and security colleagues in the store to deter shoplifters.” 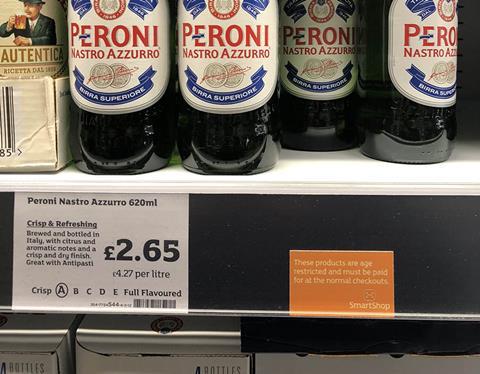 Any additional measures are likely to be worth the effort if Sainsbury’s has taken the lead in eliminating queues.

“At lunchtime, people want to be fast and during rush hour the queues get very long,” says Dey. “They want to skip that queue, that’s the most important thing they are feeding back.”

Catching up with Amazon Go

Skipping the queue is the big selling point, just like it is in Amazon’s ground-breaking Amazon Go store in Seattle. Sainsbury’s CEO Mike Coupe has been vocal about the threat posed by Amazon. So how does his trial store compare with Amazon Go?

Amazon Go is even more streamlined, chiefly because the 1,800 sq ft store operates like a giant hotel mini-bar so there is no fiddly scanning involved. A combination of artificial intelligence, computer vision and sensors ensures that customers are only charged for what they pick up and leave the store with.

Shoppers enter through a bank of turnstiles and activate the Amazon Go app by scanning their smartphones. When they exit through the turnstiles a receipt is pinged to the phone (in Sainsbury’s, shoppers need to scan a QR code by the exit to get their receipt). There are no cashiers, though there is a ‘greeter’ and a store assistant to check ID for alcohol sales.

After a year of tech-related teething troubles with its system, dubbed ‘Just Walk Out’, Amazon Go opened to the public in January. Amazon didn’t comment on how the store is performing this week, or whether it has any plans to hit the UK, but The Grocer understands feedback from the public at its Seattle store has been positive and any tech troubles have been solved.

The tech is flashier, but Amazon Go is a standalone store compared with Sainsbury’s, which has effectively bolted a new way of paying on to an existing branch. Sainsbury’s has no plans to launch a such a standalone store that relies solely on this tech. But fundamentally Sainsbury’s solution solves the same problem in eliminating the queue, so the tech-loving Coupe has good reason to be happy.

“As you’ll have seen from the Clapham store, Sainsbury’s is committed to offering customers a range of ways to shop with us and the service colleagues provide is an important part of what makes us different,” says a spokeswoman. “It’s about having the right mix of tech that customers want but also colleagues to provide great personal service and great on-shelf availability.”

As for Sainsbury’s UK rivals, Tesco and the Co-op have been trialling similar tech at their HQs since June and March respectively, but neither was ready to provide any update on progress.

Morrisons has no confirmed plans or trials in place, and neither does Asda, though that could change when or if it merges with Sainsbury’s.

Certainly if Sainsbury’s SmartShop proves a success, it seems likely that others will follow suit with similar solutions sooner rather than later.