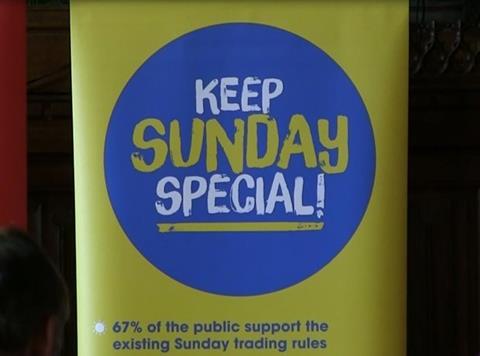 The government has admitted it has failed to commission any research over the past 10 years to look into the impact of Sunday trading deregulation.

Anna Soubry, business minister, made the admission in answer to a parliamentary question tabled by Kevin Brennan MP.

Soubry replied that the former Department of Trade and Industry (DTI) commissioned Indepen in 2006 to evaluate the economic costs and benefits of extending Sunday trading hours.

“My department has not commissioned any research since then into the effects of the extension of Sunday opening hours.”

Keep Sunday Special said the 2006 report was commissioned as part of a wider review into Sunday trading hours and the DTI decided at the time not to make changes.

Then trade and industry secretary Alistair Darling said at the time that having considered all the evidence from the review, the government had concluded there should be no change.

“For the government to attempt to justify its decision to change Sunday trading laws with research that led to a previous government retaining the rules is just absurd,” said KSS member and Association of Convenience Stores chief executive James Lowman.

“There is a wealth of new evidence that shows that consumers don’t want change, that the proposals would damage small shops and would harm high streets when local authorities favour out-of-town locations over centres.”

The government’s proposals were “nothing more than an ideological pet project” from chancellor George Osborne and should be voted down in the Enterprise Bill next week, he said.