Sunday trading debate is being politicised by George Osborne 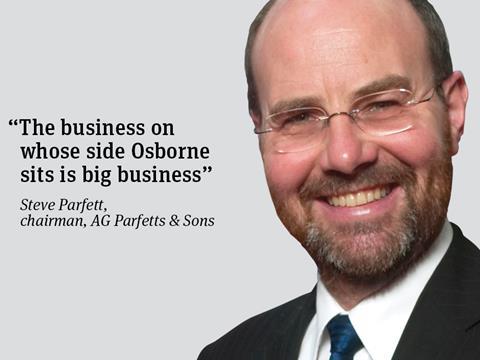 The Chancellor used his speech in Davos to tell business he’s on our side, but I often wonder just which businesses he is referring to.

I wrote in September about Sunday trading, and set out my thoughts on the reasons to leave well alone. After Sajid Javid’s announcement this week, I return to the subject as it appears it has become a Putin-style attempt by George Osborne to establish his machismo to MPs and the public.

It has already been comprehensively demonstrated that the result of such a change would not increase trade for stores, but just spread existing trade over more hours, introducing unnecessary cost. Opinions among the multiples are highly divergent, with Asda apparently in favour (it would be after the Christmas it had), Sainsbury’s against and the others of no clear view.

The measure was dropped from the original legislative platform proposed, not least because of opposition from increasing numbers of Tory MPs and more significantly the SNP, worried about knock-on effects in Scotland. The writing on the wall was that a defeat was inevitable.

For wholesalers and retailers in the real world, there is a real danger of the political equivalent of compassion fatigue and those that care about this issue need to continue lobbying as hard as ever. I am meeting Nigel Mills, MP for our Somercotes depot, this week and shall be writing again to other MPs where there is a Parfetts depot - this is a fight we have a chance of winning.

The proposal is now set to reappear in the guise of the upcoming Enterprise Bill, which is currently progressing through the House of Commons. Not only will this not give members of the House of Lords the opportunity to express concerns, but it will be operated under the English laws for England scheme. This will deny the SNP a chance to vote against the Bill and it is therefore likely to pass into law. This is a highly political attempt by the Chancellor to circumvent the political process and demonstrate how to deal with ‘upstart Scots’, not least in order to burnish his credentials to succeed David Cameron.

Recent events seem to indicate that the business on whose side the Chancellor sits is big business, not least Google, with its remarkable ability to set its own rate of corporation tax at 3%.

Liberalisation of Sunday trading would achieve a sanitised, homogenised feel to the UK. More importantly, it is a proposal that is wholly about ideology and has no economic logic.

It is in the interests of our country, during challenging economic times, for the Chancellor to concentrate properly on the economy and stop indulging in personal politics and gestures.