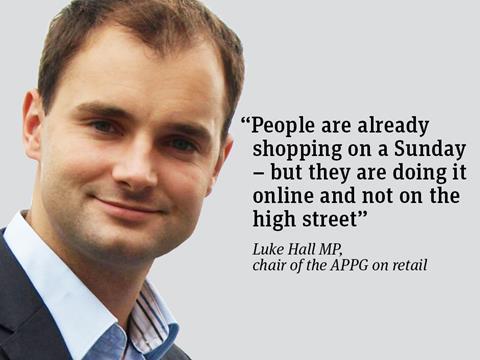 During my career in retail, first as a sales assistant, then as area manager, I grew used to a familiar sound at quarter past four every Sunday afternoon. It was the sound of customers knocking on a locked door, wanting to pick up last minute shopping. It was also the sound of an unproductive workplace.

Productivity growth in the retail sector has been strong for several years, having grown around 4% a year since 2013, stronger than the economy-wide average. The rising impact of the internet and online shopping contributed to a shift in productivity, with the extension of broadband services and take-up of mobile devices having a significant effect. By May 2015, internet sales accounted for 12% of all retail spending, meaning the UK has one of the highest proportions of online market share in Europe.

One way to support the continued growth of productivity in the sector is to revive the policy of devolving power over Sunday trading hours to local authorities. This would give retailers the freedom, with the backing of local communities, to make better use of large retail stores, allowing them to sell more without a proportionate increase in costs.

Consumer attitudes are continuing to change, with a much greater emphasis on choice, not just of product range but shopping habits too. Young people increasingly expect choice in everything they do, including when they shop, and are 32% more likely to support extended Sunday trading than people aged over 65.

Data released by Visa shows that despite concerns about Black Friday limiting growth, consumer spending rose in December. The sharp rise in e-commerce spending, up 7.4% year on year, demonstrates the strength of online growth, especially when compared with the extremely flat face-to-face spending in December (-0.1%).

Further data from Visa suggests face-to-face spending on Sundays has risen 35.2% since 2011, compared with 28.2% on Saturdays. Coupled with the online increase of 68.9% on Sundays to Saturday’s 56.7%, it is clear the consumer appetite for Sunday shopping continues to grow and must be addressed. People are already shopping on a Sunday; they are doing it online and not on the high street.

Results from the Centre for Economic Performance study in March 2015 suggest deregulation of Sunday trading laws has a considerable positive impact on employment, which stems from new firms being able to enter the market and job creation in existing firms, too. It also found that deregulation increased expenditure as a whole.

Devolution and deregulation are powerful tools for reducing unemployment, increasing competition, driving down prices and improving productivity. Let 2016 be the year in which the government offers consumers greater choice and gives retailers the opportunity to boost productivity.

Customers are knocking on locked doors around the country at quarter past four every Sunday. 2016 should be the year we let them in.

Luke Hall MP is chair of the APPG on retail