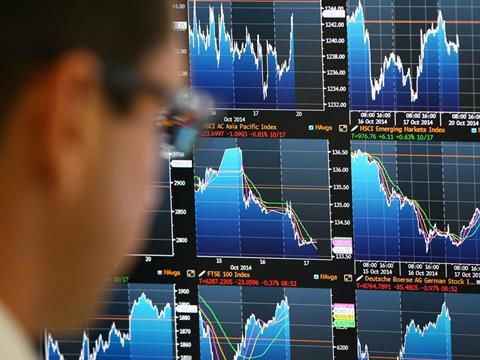 A year of seismic change for grocery had a catastrophic effect on a host of share prices across the sector.

Some of the biggest names in UK retail will look back on 2014 with a shudder - and the early signs are 2015 could be every bit as tough as the supermarkets struggle to reassure the City of their growth prospects.

But despite a collapse in trading at the major mults, there were areas of the retail and fmcg sector in strong growth and a number of savvy industry players were able to tailor their offering to seize those opportunities.

One area of solid growth was in food-to-go, which proved the bedrock of the 2014 success of Greencore, Greggs and Domino’s Pizza (while Whitbread also owed some of its success to its fast-growing Costa coffee arm).

Greencore, which makes more than 350 million sandwiches, baguettes and wraps each year for the mults, attributed the lion’s share of its 6.4% revenue growth to £1.27bn in the year ended 26 September 2014 to the food-to-go division, aided by a big M&S contract win. Operating profits jumped to £82.9m as a result. It also signalled its confidence in this strategy by investing £30m in new UK facilities at its Northampton plant (due to go live in 2016).

Just as important was its increasing success in the US food-to-go market. After sealing big contracts with Starbucks and convenience stores such as 7-Eleven, the group is backing its rapid growth with big investment, demonstrated by the acquisition of frozen food-to-go manufacturer Lettieri’s, a £7m injection in the Jacksonville factory and the construction of a £20m facility in Rhode Island.

Greggs also rode the food-to-go wave to become one of the turnaround stories of 2014. “Greggs proved one of the stars of the show,” says Shore Capital analyst Clive Black. The bakery chain’s shares soared to a five-year high in December - and up 66% to 737p for the year - after revising its profit forecasts upwards as sales growth accelerated in the second half. As well as increasing the range and breadth of its offer, moving into hot drinks and healthy sandwiches, Greggs invested in modernising its estate with simple initiatives such as the addition of seats.

WH Smith is also betting on future sales rises in the food-to-go arena with expanded ranges being trialled in key railway stations and hospitals, as well as a partnership with M&S’ Simply Food brand in some outlets. Perhaps not a fashionable name in UK retail, nonetheless the newsagent confounded short sellers in 2014 with its shares rising 28.5% over the year to 1,355p. The big jump came in October when WH Smith posted an 8% rise in full-year pre-tax profits to £114m despite a 3% decline in like-for-like sales as its cost-­cutting strategy kicked in. Another £21m of cuts are on the way as the group turns its focus away from the high street and toward travel outlets.

Instead of slashing its way to success, however, the meat supplier chose to spend to achieve future growth. In October, the company acquired poultry producer Benson Park in an effort to diversify and, with a robust ­balance sheet, Cranswick is well placed for future large-scale investment.

There are currently no brokers with a sell ­recommendation on the stock, despite its rises at the tail end of 2014 (it was up 11% to 1,367p for the year).

“Cranswick are bucking the trend by winning new ­business from their competitors,” Investec analyst Nicola Mallard says. “Raw material costs have also been moving in their favour, helping profits if not top line.”

Not the only discounters in town

Newly listed discounters also did well. While Aldi and Lidl stole a march on the multiples in 2014, investors piled into the IPOs of Poundland and B&M Bargains, and they were not disappointed. The long-rumoured Poundland IPO took place in March, with its market value jumping from £750m to £925m by the end of the first day of trading. Its shares currently sit at 340p, up from the flotation price of 300p.

Customers are continuing to flock to Poundland’s ever-growing portfolio of stores, with the chain posting more impressive first-half figures (profits rising to £8.4m and sales up 15% to £528.2m) in November.

“The real winner in 2014 was Poundland,” adds Black. “It appreciated very well, as did B&M Bargains.”

Another ‘discounter’ that did well, at the small-cap end of the market, was little-known AIM-listed butchers chain Crawshaw. Its shares more than doubled in the past 12 months - with a high of almost 70p in June - as it continued to tempt customers away from the big supermarkets with its host of pre-packed meat mix-and-match deals and value ranges, alongside a traditional in-house butchery service and hot food-to-go offering.

Backed by the likes of Isis Equity Partners, Unicorn and Schroders, Crawshaws harbours ambitions to become a national brand and expand beyond its Yorkshire and Midlands heartland in the ­coming years.

And it’s not only grocery ­discounters winning over consumers as Associated British Foods has proved with its strong share price performance (up 22% to 3,080p) being driven by booming sales at value clothing giant Primark.

And what of the capitulation of the supermarkets? As the discounters turned the screw, an escalating price war helped wipe more than £16.6bn off the collective market values of Tesco, Sainsbury’s and Morrisons, with Tesco hardest hit as its share price crashed by almost 45% by year end.

At least the supermarkets can reflect on the fact it could have been worse. Shares in online fashion retailer Asos - and another former Stock Market darling in SuperGroup - fell at a greater lick (in percentage terms at least), along with Mothercare.

And spare a thought for Premier Foods, as the pain of the multiples not only translated into misery for the supplier but at an even greater rate.

A “bellwether for what is happening in UK grocery”, according to Investec’s Mallard, shares in the Bisto and Mr Kipling owner took a battering - despite a successful refinancing - as the supermarket price war intensified, and promises of a pick-up in trading in the second half failed to materialise. For a supplier that is so exposed to the big four supermarkets, the first salvoes fired this week in the price war won’t make for easy reading. 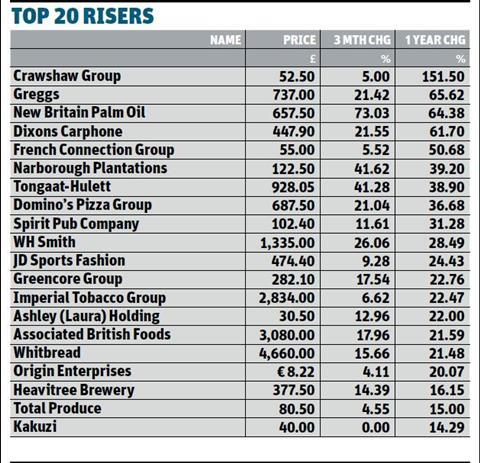 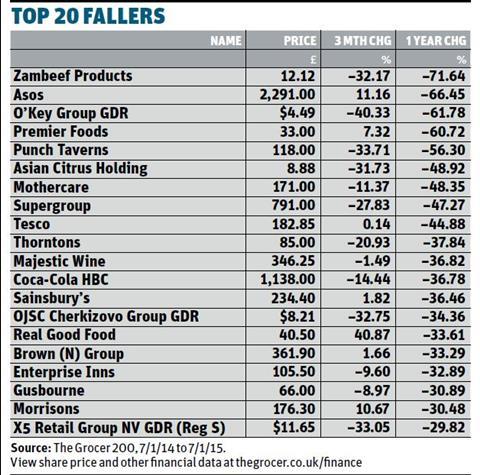