City news: Sainsbury's in the spotlight as shares plummet 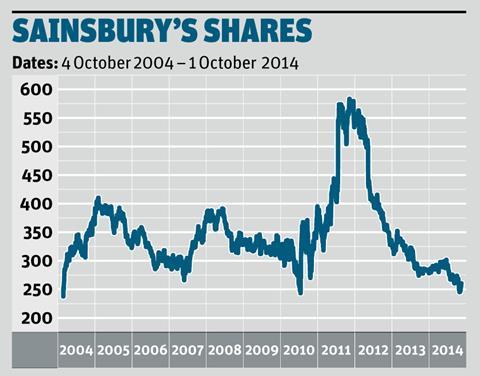 If the Tesco crisis dominated the City last week, it was Sainsbury’s turn in the uncomfortable glare of the spotlight this week.

The supermarket’s shares plummeted by 7% to a decade-long low of 234p on Wednesday after announcing a 2.8% drop in like-for-like sales and warning of further sales falls in the second half of the year. The fallout took down the other supermarkets too, with Morrisons and Tesco dropping 5% to 159.9p and 3.1% to 180.4p respectively.

The Sainsbury’s sales drop was less than the 3% to 4% decline analysts had feared. The market’s negative reaction seemed to be down largely to the stark commentary from new CEO Mike Coupe, who warned of a “perfect storm” facing the major grocers amid the “most challenging” conditions he had seen in his 30-year career.

Sainsbury’s was also driven down by its admission it is undertaking a strategic review, which has led to speculation its dividend will be slashed. Tesco recently cut its interim dividend by 75% - although Morrisons resisted the urge to follow suit, analysts expect action from Sainsbury’s.

Analysts at JP Morgan Cazenove wrote: “It is unrealistic to believe that its quality positioning will make it immune to Tesco’s inevitable price repositioning. We remain of the view that the negative top-line trends will likely lead to a major cut in the dividend and a potential rights issue.”

Earlier in the week, Tesco’s share price seemed to be affected by speculation about a potential rights issue, but Tesco and Sainsbury’s both played down their need to raise new equity.

Elsewhere, Associated British Foods jumped up 4.5% to 2,679p on Tuesday after Credit Suisse upgraded the company to “outperform” from “neutral;” it argued the share price had overreacted to ABF’s weakness in sugar as that accounts for just 10% of its earnings.