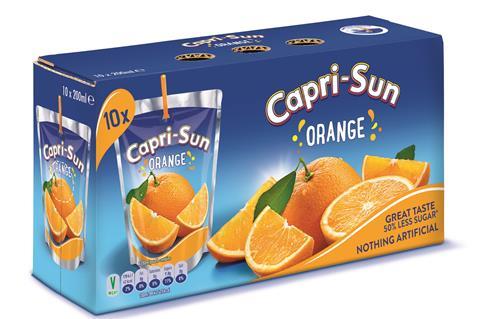 Capri-Sun has become the latest brand to fall victim to shrinkflation.

Owner Coca-Cola European Partners has slashed two pouches from the majority of 10x200ml multipacks of the brand’s drinks.

A spokeswoman for CCEP told The Grocer the change “reflects a number of factors affecting the cost of production”.

The decision to cut packs was made “to ensure that Capri-Sun remains affordable as possible, while providing the same high-quality ingredients that are at the heart of the Capri-Sun brand”, she added.

Yet data reveals retailers are stocking the new, smaller packs at the same price - or higher in some cases. A 10x200ml pack of Capri-Sun Orange in Asda, for instance, had a shelf price of £2.50 before the change. An 8x200ml pack now costs £3 [Edge by Ascential 52 w/e 2 December].

Meanwhile 10x200ml packs of the same flavour were being sold in Sainsbury’s for £3 prior to the change. The new packs are now on sale at the same price [Edge].

The CCEP spokeswoman stressed the smaller packs were “now aligned to the wider kids drinks segment and will continue to be clearly labelled and priced at the discretion of retailers”.

The changes do not appear to have affected Capri-Sun’s Fruity Water spin-off brand, which is still being sold in 10x200ml packs in the mults.

CCEP reformulated Capri-Sun in 2018 to bring it under the threshold for the sugar tax, slashing the drinks’ sugar content by 50%. It then kicked off a major £4m marketing push for the brand.

CCEP stressed at the time it would “never change the recipe of any one of our brands unless the taste is equalled or made better”.