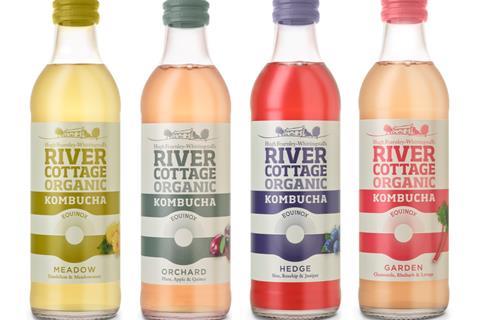 Celebrity chef and food writer Hugh Fearnley-Whittingstall is launching his own kombucha brand.

He has teamed up with Equinox Kombucha to launch a four-strong range of drinks under his well-known River Cottage brand.

Called Garden, Hedge, Meadow and Orchard, their flavours are billed as being inspired by “the UK’s natural cultivation environments and key ingredients”.

Fearnley-Whittingstall told The Grocer: “I have been into kombucha for a couple of years now – I also make other drinks with it, using it as a base for non-alcoholic cocktails, putting it in my muesli and, if I overbrew it, I use it as a vinegar.

“I had been looking for a kombucha partner for a while and Equinox were always streets ahead.

“Part of our process was to develop a way of flavouring the kombuchas which gives them an edge.

“If you add a lot of interesting things while brewing, some will push through but some just get eaten by the kombucha and lost in the fermentation.

“We’ve been making separate infusions and blending them just prior to bottling, at which point you get a much more interesting and truer aromatic from the ingredients.”

The drinks will roll into Waitrose from 28 September (rsp: £2.20/275ml). They will also be available through Abel & Cole.

Fearnley-Whittingstall added he hoped the range would help broaden the appeal of the category and increase shoppers’ understanding of the drink, as well as boosting its prominence as an alternative to fizzy drinks, fruit juices and alcohol.

He said he was also exploring the possibility of creating draught kombucha for the on-trade. “It can be stored in pub cellars – the temperature is ideal because it doesn’t need to be super chilled.”