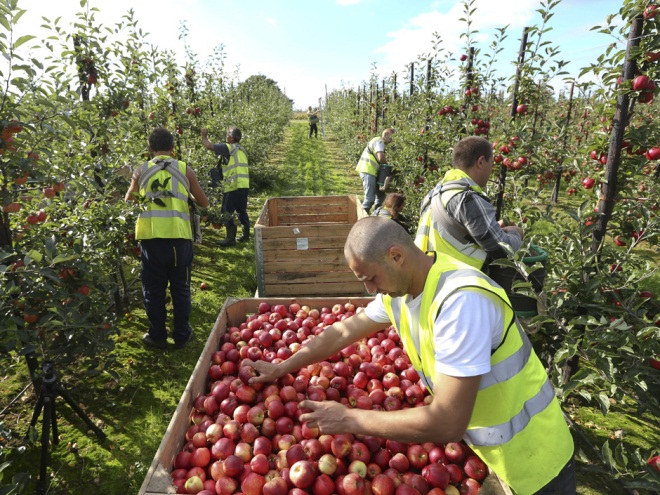 Fruit and veg could be left to rot in fields, said NFUS president Andrew McCornick

Growers in England’s south west are already suffering from a lack of seasonal labour, leading to early season losses, the NFU has warned.

Apple growers and producers of other seasonal fruit and veg were struggling to find enough workers to tend and harvest crops, said chairman of the NFU’s horticulture and potatoes board Ali Capper.

“We have a crop that is set to grow and not enough workers to pick it,” said Capper. “The impact on our industry is already evident, 41% of apple growers saw fewer applications for seasonal picking work in 2018, and 61% believe this year will be even worse.

“We need more certainty from government that seasonal workers can come from anywhere in the world to help us grow, pick and pack our British apples – just like every other European country.”

Farmers and growers now faced further uncertainty, after the Commons voted down Theresa May’s Brexit deal last night. With the 29 March deadline looming and no deal in sight, some 500,000 jobs in the agriculture sector were at risk, warned NFU president Minette Batters.

She called on the government to offer reassurance to the sector, jeopardised by the prospect of lower import tariffs on food.

“Let’s be clear, if there was no deal, Britain would be actively encouraging food imports from all over the world potentially produced to food standards lower than is legally allowed by UK farmers,” she said.

“This would leave our own farmers facing the devastating outcome of having limited markets for their own produce while at the same time being undercut by low standard imports.”

It comes as NFU Scotland this week hammered the government for “hiding behind the meagre allowance on the SAWS pilot scheme of 2,500 people from outside the EU”. The figure wouldn’t begin to cover the shortfall as ever more EU workers turned their backs on the UK and left fruit and veg rotting in fields last year, said NFUS president Andrew McCornick.

“It is much bigger than fruit, veg and horticulture though,” he added. “The largest manufacturing sector in the UK is food processing and a big part of their labour is non-UK – more than 50% in the red meat sector, over 90% of vets in approved meat establishments, upwards of 30% of the permanent staff in the dairy sector and 40% of staff in egg production.

“Approximately 60,000 lorries on our roads are driven by non-UK drivers and the retail sector requires large numbers of non-UK staff within their supply chains, both shop front and behind doors.”

Meanwhile, recruitment companies were having difficulty meeting demand, hindered by the government’s white paper on future immigration policies which offered no assurances on whether it would be able to ensure labour requirements were met in a cliff-edge no-deal scenario, said McCornick.