Mults under pressure over New Zealand lamb facings at Easter 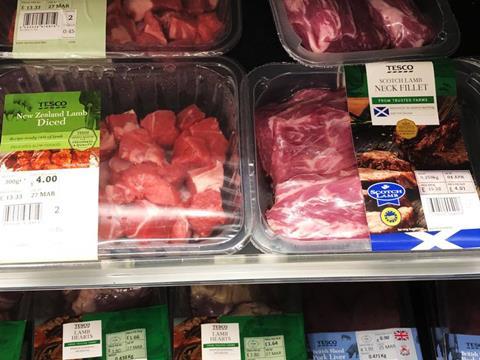 Supermarkets are stocking nearly twice as much British lamb this Easter as last year - yet they are still facing criticism from farmers for selling too much New Zealand meat.

NFU Scotland’s Easter Lamb Shelf Watch, published this week, found 78% of 2,900 packs of lamb in 47 stores north of the border contained UK-reared meat from 20 to 27 March, compared with 44% last year.

“Farmgate prices in New Zealand are high. Add on shipping and freight costs and their lamb is not as competitive as it has been in previous years,” said AHDB analyst Duncan Wyatt.

“There is availability of home-produced lamb out there and, as we continue to face the uncertainty that is Brexit, we want to see retailers market British and Scottish lamb more and more,” said John Armour, NFUS livestock policy manager.

Waitrose sourced 94% of its Easter lamb from New Zealand in Scotland, according to NFUS. A spokeswoman for the retailer said its customers wanted lamb that was “tender” and in season.

“The vast majority of British lambs have only just been born and no retailer can get sufficient volume of new season UK lamb for Easter,” she said. “Therefore outside the traditional British season we use selected farmers in New Zealand.”

It comes as Morrisons this week issued its lamb joints with blue ‘passport’ stickers to demonstrate their British origin after pledging that all of its Easter lamb would come from UK farms.