Salad crisis over as courgette and lettuce supplies stabilise 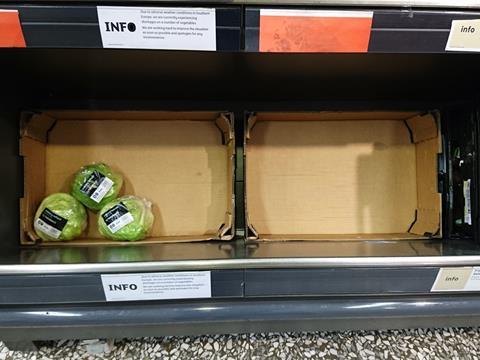 Courgette and lettuce supplies from Europe have stabilised after poor weather across Spain caused shortages earlier this year.

Supplementary imports from the US have now stopped, as yields across Europe have picked up in the past few weeks. But the situation remains challenging, according to growers, with supplies still lower than normal.

“We’re probably stable from now until the end of the Spanish import season, and then everything will settle down by the time we get to UK production, which will be the beginning of May,” said Anthony Gardiner, marketing director at supplier G’s Fresh.

However, some items were still experiencing supply issues, with reduced availability of speciality tomatoes, Spanish chillies and peppers, according to Andy Weir, marketing director at wholesaler Reynolds.

Tomato yields had not improved since January, and there had been “sporadic periods where certain colours of pepper are still not available”.

Tomatoes and peppers were also hit by the flooding in Murcia, Spain, which left some fields reduced to 30% capacity.

“We’re expecting the market conditions to get a bit more challenging in the next few weeks because of reduced plantings during December and January,” said Weir.