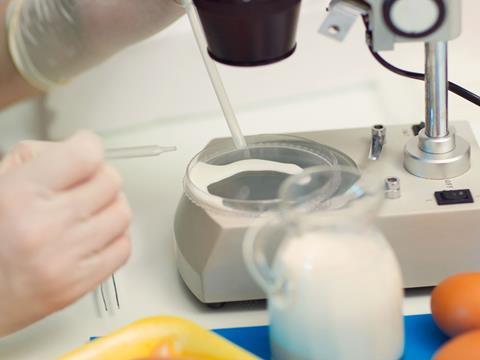 In an interview for this year’s Dairymen supplement, Silicon Valley food startup Perfect Day said it would launch dairy proteins made using genetically engineered yeast as food ingredients within “the next couple of years”.

The company claimed the proteins, made using a fermentation process “akin to craft brewing”, could be used to produce an animal-free milk that would taste like real cows milk, while boasting the welfare and environmental credentials of plant-based products.

The majority (83%) of Brits were unaware of these developments, but nearly three in 10 (28%) said they would buy ‘synthetic’ milk, with less than half (40%) refusing to consider it, our survey of 1,000 UK consumers by Harris Interactive found.

Who needs cows? Lab-made milk could be on sale soon

“Immediate reactions are somewhat positive,” said Celia Ward, a senior research executive at Harris Interactive UK. “Clearly there is scope to spread the word about synthetic milk and its benefits.”

Younger consumers were more open to the idea of synthetic milk than older shoppers, our research suggested. Almost a third of consumers (31%) agreed it was a ‘good thing’ for society, but that fell to just 19% of over-55s. In contrast, 44% of 18 to 24-year-olds were in favour.

With most shoppers still in the dark about synthetic milk, there were some concerns “to be overcome for consumers to be more open to the idea”, added Ward.

Almost half of the shoppers (50%) we surveyed were worried it might contain dodgy chemicals or ingredients, with the fact synthetic milk wasn’t ‘natural’ (43%) and anxiety over possible long-term side effects (37%) also major factors.

Read more in The Dairymen 2018

“With 17% of consumers saying they want to try alternative milks but don’t think they taste the same as real milk, a synthetic milk that tastes like real milk could be a winning proposition,” Ward said.

Perfect Day claimed its “pure and functional” dairy proteins could be used to produce milk, ice cream, yoghurt and cheese that would “taste exactly the same as those made with conventionally-produced dairy proteins”.

The company stressed any traces of genetically-modified yeast would be carefully filtered out of the final product. “Genetic modification is part of our process, but it is not the product,” it said.