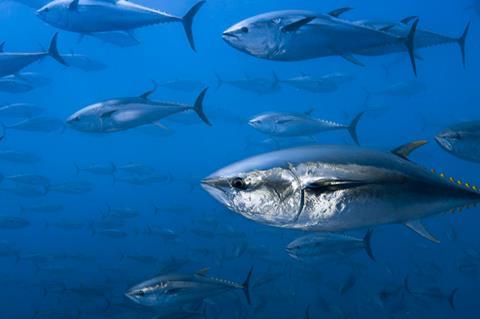 Squid is a key source of food for tuna and overfishing it could damage tuna’s food chain, the report said

Unregulated fishing across swathes of the Indian Ocean for species such as squid is now risking the health of the wider food chain, including key species such as tuna, new research has found.

According to a report by the World Wildlife Fund for Nature (WWF) and Trygg Mat Tracking, fishing for key predators and prey in northern areas of the ocean not covered by protective frameworks has exploded in recent years – putting the broader health of the ocean at risk.

This area and another stretching from India to Australia are not covered by any regulation for squid fishing, which is taking place to provide food for human consumption as well as material for fishmeal.

International agreements which operate in these areas, such as the Indian Ocean Tuna Commission, do not take all species in the food chain into account, a situation the report said should be addressed if fish stocks are to be sustainable.

“As the world’s top seafood market, the EU must adopt and enforce ambitious traceability measures to prevent unsustainable products from entering the market. These actions will secure the livelihoods of honest fishers, bring credibility to seafood products consumed in the EU and secure the health of our ocean.”

Fishing in the Indian Ocean has come under a spotlight in recent months after Tesco announced it would stop sourcing tuna from the region unless an effective recovery plan for declining stocks was put in place.

Other UK retailers and fishing federations have argued boycotting tuna caught from the ocean would not be the correct approach, despite overfishing.

Indian Ocean yellowfin tuna is one of the world’s most overfished stocks and scientists have previously warned it is in danger of complete collapse by 2026.