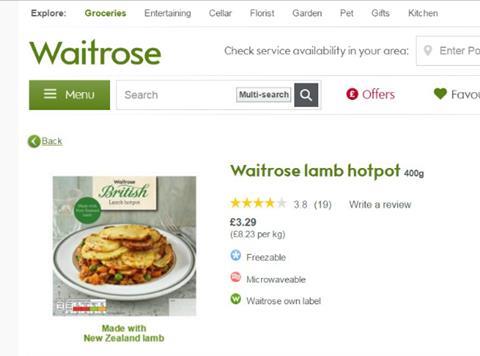 Waitrose is to rebrand its ‘British’ ready meals range after coming under fire for using New Zealand lamb as an ingredient.

The retailer pledged to rebrand the range, which includes shepherd’s pie, lamb hotpot and liver & bacon ready meals as ‘Classic’ after facing criticism from farmers on social media over its use of imported lamb.

A Waitrose spokeswoman said it had placed stickers on the range “to ensure the provenance of the lamb in the meals is clearer”, while it was also preparing to remove the large ‘British’ reference on the front of packs and replace it with new ‘Classic’ branding. It is understood newly labelled products could be on sale as early as next week.

“This was only ever supposed to denote the origin of the recipe but we understand why confusion has arisen. In addition, we have challenged our supplier to explore the practicalities of using more British lamb in our ready meals,” she added.

“At the moment, because of our policy of only buying from our dedicated supply chain and using the whole carcase, we do not have sufficient raw material available to make this change but, nevertheless, we are exploring this option.”

Aldi this week followed Waitrose in pledging to rename its ‘British Classic’ ready meals brand in order to “make the distinction even clearer”.

The move was welcomed by NFU president Meurig Raymond, who described the use of the ‘British’ brand name, despite the meat being sourced from New Zealand, as “misleading for shoppers - and frustrating for British farmers, especially those who produce lamb Waitrose could have sourced”.

It comes as Morrisons was forced to clarify its lamb sourcing policy last week after it launched a promotion of Australian and New Zealand lamb under its Market Deal brand.

NFU livestock board chairman Charles Sercombe claimed the imported products were being placed near British messaging at the point of sale, “potentially leaving shoppers confused about the origin of the product they are purchasing”, while the meat had also been seen on fresh counters.

“There is obviously a demand for British lamb so I would urge Morrisons to be clear to customers about what its commitments are,” Sercombe added.

“All Morrisons branded fresh lamb is British, available all year in all stores,” said a spokesman for the retailer.

“New Zealand and Australian lamb will always be branded Market Deals and should never appear on our butchers’ counters. It will be merchandised elsewhere in the store,” he added. “We were therefore really disappointed to hear that NFU members have seen it on our counters. We are investigating and will re-communicate our policy to our butchers.”