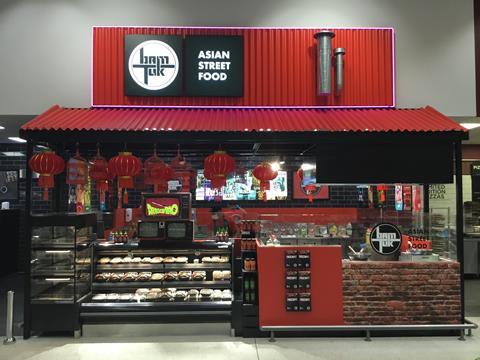 The concession offers hot and cold rice, noodle and curry dishes to eat immediately or heat at home

The concession offers hot and cold rice, noodle and curry dishes from Thailand, Indonesia, Cambodia, Laos, the Philippines, Hong Kong and Singapore, to eat immediately or heat at home.

KellyDeli brand Sushi Daily made its first appearance in Asda in 2018. The supermarket ramped up its food-to-go offering earlier this year, striking up several ‘test and learn’ partnerships with external brands. Greggs launched in several stores in February, followed Yo Group company Taiko’s Panku pan-Asian concessions in March.

“We continue to work with partners such as Greggs, Sushi Daily and Panku to open in new locations,” an Asda spokeswoman told The Grocer.

“At the start of the year we announced we would be bringing a number of exciting food-for-now partners to Asda stores, with plans to trial new and exciting cuisines in many of our stores,” she added.

The arrival of Bam Tuk is part of a major overhaul of the north Birmigham store. It is understood McDonald’s, Claire’s, Sushi Daily, Costa Coffee and Timpson will also be opening within the store by the end of the year.