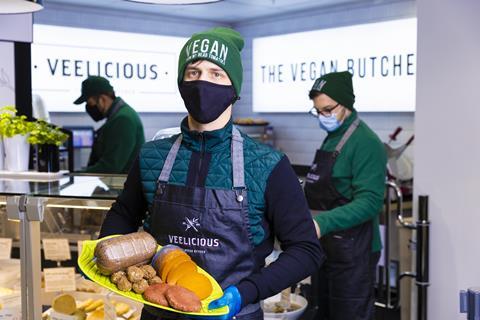 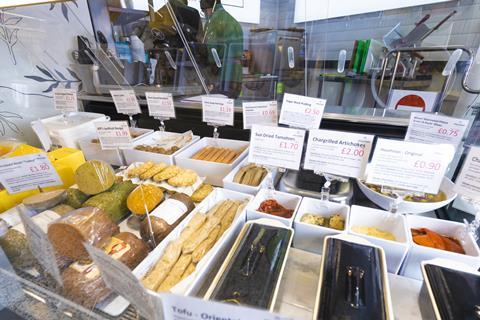 The counter sells a selection of products such as mock lamb, black pudding and base cooking sauces 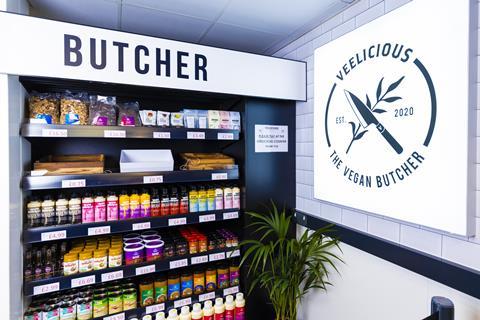 Vegan-friendly sauces, spreads and glazes, such as a soya glaze and almond butter, sit in the chillers 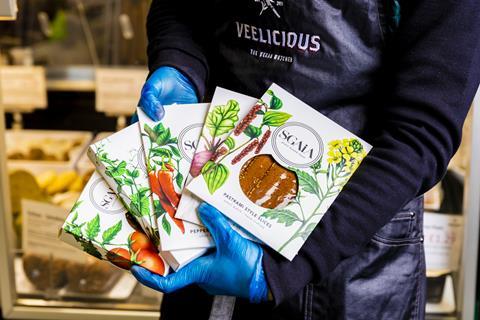 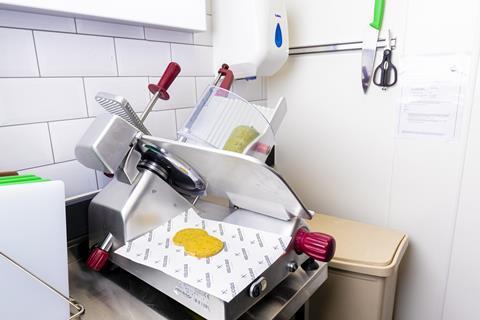 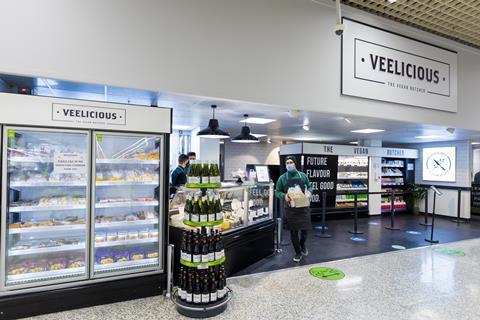 In a month of vegan innovation, Asda has gone all-out with a vegan butcher’s counter at its Watford store. Selling mock lamb, charcuterie and more, can this new concept tempt shoppers?

It looks like a chipolata. It promises to taste like a chipolata. But the meaty-looking creation at Asda’s new ‘Veelicious’ counter is most definitely not a chipolata. No, it’s one of the host of next-gen vegan options – including charcuterie, calamari and croissants – to hit its Watford store last week.

The so-called ‘vegan butcher’ counter, launched just in time for Veganuary, is certainly not short on choice. Developed in partnership with foodie startup KBox, it offers all the products you would expect at a deli – except, of course, without the meat and cheese.

There’s no doubt it’s on trend and – looking at the effort put into the slick design – could well appeal to meat-eaters as well as plant-based converts. Still, you can’t help feeling it’s a little niche. For Asda’s chief strategy officer Preyash Thakrar, though, that couldn’t be further from the truth.

He’s speaking not just from customer data, but from personal experience. “I’m vegetarian and my 16-year-old son turned vegan during lockdown,” he says. “Flexitarianism is definitely a clear mainstream customer trend. And we want to be at the forefront of it.”

The Veelicious counter will help move Asda closer to that aim, he believes. There are, of course, the products themselves. Delicacies such as the jackfruit wings and mock lamb – currently ranking among the customer favourites – would be tricky to find in the mainstream plant-based aisles. “As we got towards the back end of 2020, we realised there was a broader opportunity for our customers to access more niche products that maybe we aren’t aware of at times,” says Thakrar.

Bringing in a specialist partner such as KBox has also helped it address the common development challenges in plant-based food, such as finding a cheese that passes the taste test.

“Flexitarianism is definitely a clear mainstream customer trend. And we want to be at the forefront of it”

Living with a vegan, it’s a challenge Thakrar can appreciate all too well. “We’ve been – enjoying isn’t the right word – but experiencing the great range of flavours that you get in vegan cheeses,” he laughs. The more specialist selection at Veelicious, which includes vegan blue cheese, feta and halloumi, aims to turn that experience into enjoyment.

On a wider level, the counter will give Asda insight into an ever more desirable demographic: the plant-based shopper. “As you try to get more visibility around vegan, how customers want to shop it and how they want to experience it is something we want to learn about as well,” he adds.

So far, the omens are good. Despite the obvious challenges of lockdown – which has limited customer numbers and made them less likely to spend time browsing in-store – Thakrar reports “really strong customer interest” in the counter. Although it’s too early to report figures, he says customers have been “having a look at it and spending as well”.

Six months from now, the team will evaluate whether that interest has been strong enough to roll out the concept more widely. “Success for us will be our customers shopping it, having an interest in it and what we can learn about the product range,” he says.

And if it’s going to be successful anywhere, it’s Watford. According to Thakrar, it’s among the top five Asda stores for plant-based sales – and any wider rollout would look at branches with similarly high levels of interest.

But whether the trial is extended or not, Thakrar says he is already proud of two achievements. First, prices start at 79p, which was a crucial point for Asda. “Vegan doesn’t need to be expensive. We’re making it affordable and that really resonates with customers,” he says.

Second, the entire execution took just six weeks from concept to opening. Once Asda found the right partner in the form of KBox, it was a rapid turnaround. “We did a very quick pitch process and then got on with it,” says Thakrar.

For him, this is a sign of Asda’s strategy to form partnerships with third-party specialists – one that has seen it join forces with B&Q and The Entertainer – taking root in its way of working. “We’ve probably surprised ourselves with how much stronger we’ve become at doing this stuff,” he says.

And if Asda can make vegan cheese taste good in the process, all the better.