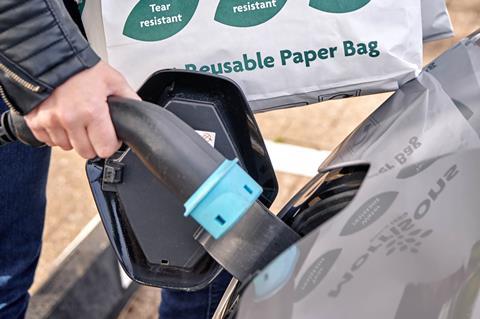 Morrisons has announced plans for a nationwide network of high-speed electric car charging points at its stores.

The first 50 GeniePoint rapid charging points were launched this week, with a further 50 planned by 2020.

The supermarket said the move would make electric car charging points more accessible to drivers and claimed it would be the UK’s largest network of high-speed chargers to date.

It said the rapid points charge an electric car six times more quickly than standard charging points, so customers can charge their car during a short shopping trip, with a 20 to 30-minute charge giving up to 100 miles of travel.

The move follows the announcement of government plans today to introduce green number plates for electric cars, making it easier for local authorities to offer incentives such as cheaper parking.

The government hopes it will boost electric car sales and contribute to the target of net zero emissions by 2050.

Morrisons’ move is the latest by supermarkets to make the technology more available to drivers.

In November, Tesco announced a deal with Volkswagen to install 2,400 charging bays which will be rolled out across 600 stores within the next three years.

“Customers are beginning to take part in the biggest revolution in car design since the internal combustion engine was first developed,” said Andrew Ball, fuel and services manager at Morrisons.

“We need to follow them and give them the opportunity to charge while they shop.”

Alex Bamberg, MD of Engie, the owner of the GeniePoint network, said: “Providing convenient, fast charging facilities is essential in ensuring drivers have the confidence to switch to electric vehicles and reduce traffic pollution. Morrisons supermarkets are ideally situated in communities as drivers go about their day-to-day activities, and will make an important contribution as we build the most reliable rapid charging network nationwide.”