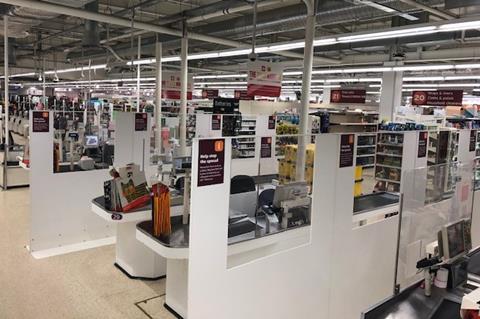 Sainsbury’s has installed further safety screens between checkouts in 150 of its busiest stores in an effort to reduce queues outside and help customers pay for their shopping more quickly.

The supermarket claimed the moved made it the first retailer to reopen “such a large number” of manned checkouts in stores.

The screens have been installed between checkouts to provide a clear barrier between queues, enabling Sainsbury’s to reopen the vast majority of belted checkouts in the 150 stores.

Sainsbury’s said customers would be able to pay for their shopping faster while still ensuring social distancing guidelines are met. And the supermarket also expected queues outside stores to be smaller as a result.

It is the latest measure taken in the frontline battle of the coronavirus outbreak and follows the supermarkets introducing ‘sneeze screens’ on checkouts, kiosks and service desks across the country.

Sainsbury’s is also trialling safety screens at self-service checkouts, with the same ambition of getting customers in and out of stores more quickly.

“Customer and colleague safety is our highest priority and we want to support our customers to pay for their shopping as quickly as possible by reducing queues,” said commercial operations director Graham Biggart.

“These protective screens will make it easier to shop in store, so thank you to our colleagues and partners who have worked so hard to get them up and running.”

Sainsbury’s trialled the new screens in its Whitechapel store in London, with customers responding well.

The retailer will focus on installing the screens in its busiest stores but is reviewing whether more stores would benefit from the new move.