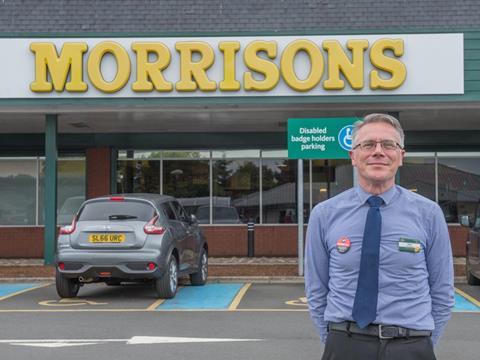 What is it like managing such an old, established store? The store is a real hub of the community. It’s been serving the area for 35 years and it’s a very friendly environment. Some of the staff have been here all of those years. It’s also close to Livingston North station, which is a main route into Glasgow, so we also get a lot of commuters coming in for food to go.

What have you done recently to improve food to go for all those commuters? We have a coffee machine at the front of the store and recently we made coffee part of our £3 meal deal, as well as bringing the price of every coffee down to £1, when it had been £1.75-2.25. It’s proved extremely popular.

Scotland’s weather has been more like Spain recently. How has that affected sales? Yes the weather has been amazing. It’s been great for things like barbecue food and party food. We’ve really benefited from having our own butchers counter in store. It means we’re really able to react to changes in the weather quickly and we’ve been serving some great burgers, kebabs and also fish for the barbecue.

What’s your favourite BBQ product in store? Because we have Father’s Day this weekend we’ve launched the ‘Daddy of All Burgers’ on our butchers counter. The description says it all. We’re also bringing back the Tomahawk steak we had last year. Let’s just hope the weather keeps up.

Will the World Cup be a big event for the store, considering Scotland aren’t in it? It obviously would be bigger if Scotland were in it but people will still be watching and we have a whole range of deals. There are some great beer deals.

Will customers be turning to traditional lager for the big match viewing? The introduction of minimum unit pricing recently has actually increased the popularity of craft beers. People have been turning away from the big slabs of beer and trying some of the craft beers, many of which we source from the local area, so it has had a really positive effect in that way.