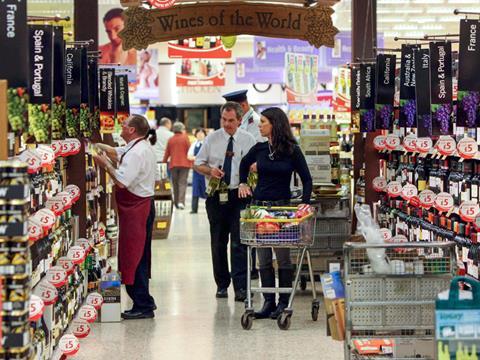 Just three months after Morrisons launched a cull of dump bins and side stacks, some similar-looking promotional furniture has started re-appearing in its stores.

The newly named ‘pick-up bins’ have been introduced to stores over the past few weeks. The Grocer understands Morrisons felt the purge went too far and that it had been missing out on incremental sales opportunities.

The pick-up bins have been used in the past couple of weeks for promotions such as ‘better than half-price’ mayonnaise and tuna, and half-price ketchup and hot dogs. There were also ‘pick up something for your teacher’ bins filled with treats for pupils to give to their teacher at the end of the school year. Morrisons has also re-introduced pallet stacks in the entrances of stores with key promotions such as beer during the World Cup.

“We’re using bins in a smarter way,” said a Morrisons spokesman. “They’re now being deployed to support availability of high-volume items, especially those on promotion. The name has been changed to reflect this change.”

In April, Morrisons said it was getting rid of dump bins and side stacks as part of a plan to declutter its stores, making shopping easier for its customers and to make it easier for staff to replenish shelves and improve availability.

The move was part of Morrisons’ wider plan to take on the discounters. Along with slashing prices on 1,200 everyday grocery lines, it is looking to reduce the number of promotions by 10% to focus on fewer, more impactful deals.

The retailer is also currently rolling out a new drive on availability, with stores told to focus on a mantra of ‘Tidy at Twelve’ and ‘Fit for Four’. The spokesman said availability had always been a key focus for Morrisons and it had “always majored on it”.