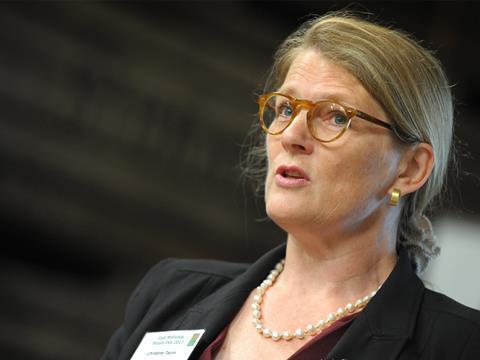 This time a year ago, things suddenly seemed a bit brighter on the GSCOP horizon. There was a sigh of relief as Adjudicator Christine Tacon cleared supermarkets of breaching the laws on forecasting, following her probe into alleged dirty tricks among the top 10 retailers.

“From March 2016,” the GCA concluded, “all retailers’ approaches appear to be compliant with the code. All retailers are striving for continuous improvement in forecasting practice.”

As forecasts go, Tacon’s verdict was somewhat of the Michael Fish/1987 Great Storm variety. Last week The Grocer revealed the Adjudicator is to launch a new probe into forecasting, as she admitted it was “the number one issue” for suppliers.

“The message I want to send out is this is not sorted and I want suppliers to come forward with information about what is happening,” she declared.

Tacon says the scope of last year’s probe didn’t go wide enough. She concentrated on potential breaches of paragraph 10 of the code, covering compensation for forecasting errorsand the need for transparency over how forecasts are made.

But Tacon has received evidence that retailers may have been breaching other major parts of the code: namely, rules on supply agreements and promotional activity. So why have these issues come to a head and will this renewed scrutiny have the desired impact?

The Adjudicator says a fresh flood of complaints on this issue arose over the vegetable shortages caused by freak weather in Spain. Some suppliers, claims Tacon, were forced to pay the cost of supermarkets finding alternative sources to try to fill the shortages.

A leading fresh produce source confirms such activity was widespread at the time. “If you were a contracted supplier, supplying X retailer with lettuces, then what they want is X,000 lettuces per week and they don’t care if you’ve got a problem. They desperately don’t want empty shelves,” he says. “If that means they’re going to have to get the products from elsewhere then they are also not going to worry about billing you, that’s just the way it goes. They don’t care if it was caused by freak snow in Spain.”

This behaviour puts retailers firmly in breach of the code, according to Ged Futter, founding director of GSCOP Ltd, which investigates potential breaches of the code. “I’m aware of a number of occasions where retailers have charged suppliers for the extra cost of importing products from alternative places such as the US.

“I’m shocked at this behaviour. Not all retailers are doing it and in some cases it’s down to badly negotiated supply agreements allowing this to happen. But to charge a supplier for higher costs for something completely out of their control like this goes against the whole ethos of the code. They were flying these products over and charging the suppliers. It doesn’t get more scandalous - it’s just outrageous.”

The second issue to be newly investigated by Tacon is whether supermarkets have overstepped the line on promotions, again an issue that has reared its head among many fresh own-label suppliers.

Paragraphs 13 and 14 of the code ban supermarkets from either directly or indirectly, requiring a supplier predominantly to fund the costs of a promotion. Supermarkets are also outlawed from deliberately “over-ordering products” or requiring activity that would entail a retrospective change to a supply agreement. “Over-ordering for promotions is an issue that is coming up in my conversations,” says Tacon.

The fresh produce source claims the huge volumes of cheap products being ordered by retailers is having a seismic impact on the supply chain. “Look at all the ludicrous price promotions the supermarkets have been running in fresh produce. Suppliers having to supply the supermarkets with such volumes is ripping through their supplies at an unsustainable rate, but what are they going to do about it? Because these businesses make up such a huge chunk of their business they can’t afford to lose it.”

Although the practices potentially breach several parts of the code, the source worries it will not be easy for Tacon to find suppliers willing to talk openly. “Not all suppliers feel the same way. I’ve spoken to some who say these promotions are great. They are shifting huge amounts of products and the retailer is funding it all. It’s not a simplistic situation and not all retailers are behaving in the same way.”

Yet John Noble, director of the the British Brands Group, says forecasting has become the top concern among suppliers, in feedback from its training session of 1,000 suppliers on the code during 2016, up from third in 2015.

Suppliers said forecasting was a bigger issue than others such as securing price increases in the wake of the Brexit vote and retailers demanding lump sum payments, which have both, until now, received more publicity.

“The accuracy of forecasts is consistently raised on our courses, as are the fines that can be levied when suppliers short deliver,” Noble says. “We also hear of these fines being deducted from suppliers without their agreement.”

So will Tacon’s new forecasting probe result in stronger action this time around or simply more hot air?

Last year’s best practice guidance by the GCA did call for retailers to bring greater transparency to forecasting and work more collaboratively as a sector with suppliers on the issues being reported - a call that some seem to have ignored.

Futter says he doubts the new lines of investigation will result in a fully fledged inquiry, but he is calling on Tacon to be much more forceful and explicit this time in her demands for improved behaviour. “She is holding several meetings in the next few weeks with suppliers and I hope they come up with the evidence she needs to take action,” he says.

Yet the fresh food source says, ironically, that suppliers themselves may not welcome too much interference from the GCA, despite the widespread “cut-throat” activities.

“In the main, suppliers prefer to fight their own battles. What Tacon has been clever at in the past is getting the message out to supermarkets where she thinks there is a problem, effectively saying, ‘Look, I’m picking up there is a problem here - what are you going to do about it?’ That is probably just as effective as an official investigation.”