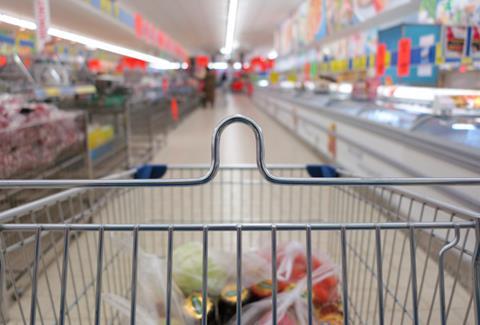 British take-home grocery sales surged by 18.9% over the past four weeks as shopper habits remained “a world away” from what retailers would usually expect.

In the four weeks to 14 June, take-home grocery sales growth continued to accelerate to 18.9% year on year, boosted by online - which was up 91% over the previous four weeks - as availability of delivery slots increased allowing nearly one in five British households to shop online.

Convenience stores also contributed to the boost, as shoppers choose to remain local during lockdown. Sales from convenience stores accounted for 14.7% of all transactions in the four-weeks period, with independent shops growing at a rate of 69.3%.

Households made 77 million fewer trips to the grocers in the latest four weeks compared with last year, but still 19 million more than in May, reflecting the slight easing of government restrictions.

Once in the shops, customers continuiued to buy more than usual, spending 42% more per trip than in June last year at £26.37 on average.

Fraser McKevitt, head of retail and consumer insight at Kantar, said: “Sales growth over the four weeks to 14 June accelerated to 18.9%, up from 17.2% previously, with shopping patterns still disrupted compared with more normal times.

“The boost has been led by online sales, which have continued to accelerate, and convenience stores, which took £1.6 billion through their tills during this period. Despite the jump, grocers are still navigating a steep drop in the amount of food and drink bought on the go, which was down by a third in early June.”

As pubs and restaurants remained closed, alcohol sales through the grocers continued to boom, growing 43% in the four-week period.

The good weather in June also meant picnic favourites were in high demand. Sales of soft drinks and chilled dips increased 28% and 30% respectively. Ice cream sales rose by 57%, burgers by 44%, and sausages by 40%.

Safety concerns and hygiene considerations meant sales of loose foods fell by 6% over the past month, as shoppers choose pre-packed products.

Amongst the big four supermarkets, Tesco grew by the largest proportion over the 12 weeks to 14 June, with sales up 12.1%, ahead of Sainsbury’s at 10.2%, with both retailers benefiting from their convenience formats and online operations.

Iceland saw sales up 31.4% over the 12 weeks. The retailer now accounts for 2.5% of the market, matching highest ever share recorded back in June 2000.

The convenience boom boosted Co-op sales by 34.5%, with the local retailer outstripping all its rivals’ growth to reach a market share of 7.4%, its highest figure since March 2001.

Ocado also achieved its highest ever market share – hitting 1.7% over the past 12 weeks thanks to sales growth of 42.2%.

Meanwhile, Nielsen found that total till sales were up 14% year on year in the last four weeks ending 13 June.

Online share of sales accounted for 13% of all grocery spend in the UK, with online sales rising 115% compared to the same period last year.

Nielsen data showed conveninece stores sales grew at a faster rate than supermarkets in the four weeks ending 13 June, up 17% as UK consumers in lockdown prioritised shopping at their most local and convenient store.

In terms of the last 12 weeks to 13 June, Iceland’s growth (+23%) continued to outperformed all the other rivals, with the Co-op (+16%) growing faster than the big four.

Mike Watkins, Nielsen’s UK Head of Retailer and Business Insight, said: “After three months of lockdown, UK shoppers have clearly adapted to their new shopping routines and in the last four weeks have shopped in the same way as they did in April and May - fewer visits but bigger trolleys and bigger basket spend.

“Whilst the dramatic shift to online has been significant, we expect this share of sales to be maintained over the next few months. However, what is just as important is how shoppers have now embraced ‘ultra local’ stores during this time.”

Cranswick’s profits jumped last year as it continued to diversify its operations, venturing into non-meat products.

During the year, the company commissioned a “world-class” primary poultry facility in Eye, Suffolk, which was completed in the third quarter and ramped up in the fourth.

Cranswick also continued to invest in farming operations, including acquisitions of Packington Pork and White Rose Farms during the second half of the year, and that of Katsouris Brothers in the first half, expanding non-meat capabilities.

During the coronavirus pandemic, Cranswick did not make use of any of the government’s funding schemes available as it entered the crisis in a “strong financial position”.

At the end of the year, Cranswick’s net debt stood at £146.9m, while the business had a “robust” balance sheet with £200m of bank facilities providing over £100m of headroom.

CEO Adam Couch said: “The last 12 months has seen us deliver key steps in our diversification strategy with the successful commissioning of our Eye poultry facility and the acquisition of Katsouris Brothers which expands our non-meat activities. We also completed two further acquisitions to increase our vertical integration in pork.

“We spent a record £101m across our asset base and this brings the total investment in our infrastructure over the last eight years to more than £400m.

“The strong growth and strategic progress we have made over the last 12 months has been made possible by the platform we have built and the pipeline we have laid down in recent years.”

Looking ahead, Couch said there had been a “positive start” to the new year, despite the uncertainty caused by the coronavirus outbreak and Brexit negotiations.

Poundland’s owner Pepco has reported strong revenue growth in the first six months of the year, mainly from expansion of its European chains PEPCO and Dealz.

For the six months to March 2020, Pepco’s revenues rose 9.7% to €1.91bn. Excluding the impact of the coronavirus pandemic on the last month of March, revenues were up 14% until March.

Pretax profit grew 22% to €116m pre-coronavirus, reflecting the benefit of continued cost leverage, but came in at €89m in March reflecting the impact of the pandemic which “significantly reduced store trading footprint and footfall”.

Currently, revenues are returning to pre-Covid levels, the company said, with 99% of stores back to trading.

During the first half the company has continued with its store opening programme across all fascias, with 150 net new stores opened in the period to bring the total number to 2,844.

With regards to Poundland, the buisness managed to achieve an operating cost reduction led by successful lease renegotiations in 76 stores.

CEO Andy Bond said: “It is pleasing to report continued strong operational, strategic and financial progress made by all parts of the Pepco Group before the impact of Covid.

“We continued our store expansion programme, delivered compelling like-for-like sales growth and converted sales to profit, while at the same time investing in infrastructure and maintaining our price leadership position within the European discount variety retailing sector.”

He added: “When Covid impacted, the group reacted quickly, protecting both our teams throughout the supply chain and our customers in our stores while protecting our cash position. Our actions ensured we had sufficient liquidity to operate through this wave of the virus but also by, for example, maintaining our store expansion programme, leave us positioned strongly to thrive once we are through this period of reduced consumer demand.

“Looking forward, the consumer outlook remains uncertain and our plans reflect our expectation of a ‘new normal’ trading environment once we all emerge from the Covid virus. However, it is likely that consumer demand for discount retailing will increase in a period of prolonged economic uncertainty and we are extremely well placed to take advantage of this trend. We remain confident that we have the vision, the strategy and the business model to continue to deliver attractive long-term sales and profit growth.”