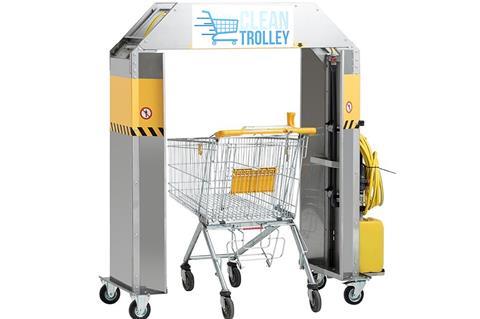 A car wash-style trolley cleaning machine could help tackle coronavirus but has become entangled in UK retailer red tape, according to the company behind it.

The machine, called Clean Trolley, was invented earlier this year in the Netherlands as a response to coronavirus. It sprays entire trolleys, including wheels, with virucide, which kills Covid-19 and other viruses, according to Wilkinson Mobile Catering, the company bringing it to the UK.

The machine allows 30 trolleys to be pushed through and cleaned in under 30 seconds, instead of wiped individually by hand, according to the company.

It’s already being taken up by supermarkets across northern Europe, including in Germany, where the machines are selling at rate of 200 a week and appearing at Lidl and Aldi branches, the company said.

But UK supermarkets are said to have been slower to respond. Wilkinson MD Mike Wilkinson said he had attempted to contact decision makers at every major supermarket but so far received no response.

The company has also approached stores offering demonstrations - an approach that has worked elsewhere in Europe, according to Wilkinson - but managers have proved reluctant to make a decision.

“In Germany, they’re more likely to say, well, we’re not really supposed to make a decision on this but heck let’s go with it,” said Wilkinson.

“We’re finding the right people to contact but they must be getting countless emails a day. We’re hitting a brick wall.”

Wilkinson had started approaching supermarkets about a month ago and sent hundreds of emails, he said. About 20 stores had been been visited.

The machines cost around £3,000 each including delivery, installation and training for staff. Wilkinson has agreed to donate 10% of profits to NHS Charities Together, to support NHS staff and volunteers caring for Covid-19 patients.

“Given the importance now attached to clean shopping spaces, Clean Trolley would be a vital boost in the effort to promote public hygiene and limit the spread of Covid-19,” said Wilkinson.

“At the moment, everyone is having to reinvent themselves and work out how to do this in an efficient manner.

“Supermarkets are doing all they can in this hugely challenging time, but Clean Trolley would help them to be even more effective and provide customers with a trolley they can be safe in the knowledge that a trolley is 100% virus-free.”