Could the big four become the big three? 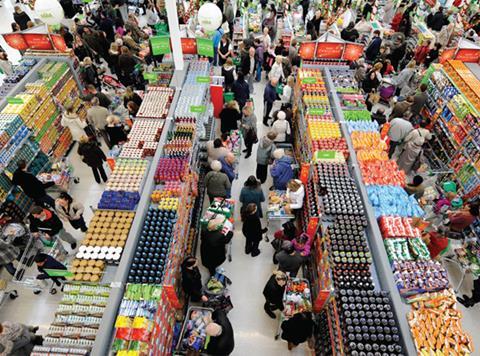 Goldman Sachs’ contention that the supermarkets needed to cut 20% of retail space created plenty of headlines this week, but the bank’s suggestion that the industry could be ripe for consolidation went almost unnoticed.

While arguing that capacity exit has to underpin the supermarkets’ recovery – a theme the Grocer explores here – Goldman also says that “we think ultimately strategic consolidation is the best solution longer-term”.

By “strategic consolidation” the research makes it clear it is talking about possible mergers between the big 4 grocers. So how likely is it that the big four becomes the big three? While Goldman concedes such a scenario faces regulatory hurdles and is probably some years away, it suggests that this is very much the direction of travel.

There has been sporadic takeover talk of the three listed grocers for a number of years – even in 2014 reports have linked Morrisons to a private equity buyout and Sainsbury’s to a bid from Qatar.

But until now large-scale industry consolidation has been off the table – primarily because the chances of such a sector-disrupting deal would have close to no chance of securing regulatory approval.

That situation remains today, but Goldman believes it could change in the coming years.

Goldman states: “To make [big 4 consolidation] allowable under regulations and attractive as an acquisition, we believe it is likely that a player would have to become loss making, or a failing firm, which implies much lower share prices before this scenario manifests.”

As such, it argues this situation is unlikely to happen in the next three years for any of the listed players.

But Natalie Berg, analyst at Planet Retail, argues that losing one of the big four was no longer a fanciful scenario. “The market is clearly over-saturated and shoppers are quite simply continuing to put fewer items in their basket,” she says. “People are now even speculating that we could even see one of the big four disappear and I don’t think we can rule it out.”

What speculation there has been has tended to focus on Morrisons being the likeliest target to be taken out by competitors, due to its more regional store portfolio and slower development of a convenience and online offer.

However, Goldman’s research appears to argue that Morrisons is in a more secure position that some of its contemporaries, given that its average supermarket size if far smaller than Sainsbury’s and Tesco and it is therefore less exposed to the problems facing large out-of-town stores.

Morrisons currently has the lowest market cap of the listed firms (£4.3bn against £5bn for Sainsbury’s and £15.8bn for Tesco), however Goldman’s price recommendations would reverse this position.

Any big four industry consolidation is highly unlikely to happen for a number of years – if only because, despite their recent like-for-like sales falls, all of the big four have a long way to go before they become sufficiently distressed to be realistic targets for a trade buyer.

However, as the UK grocery market continues to structurally change in an unprecedented manner, the prospect of the big four becoming the big three has shifted from implausible just a couple of years ago to scenario that needs to be taken seriously.