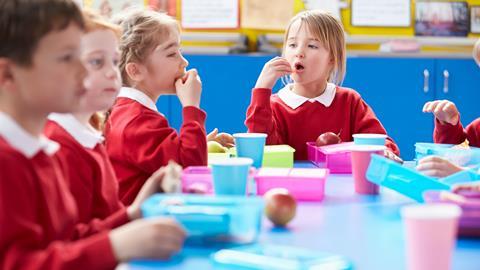 Free school meals: how government has botched the scheme

It’s not just Boris Johnson’s plans for getting children back into the classroom that are in disarray.

The government has also come under fire from supermarket leaders over the alleged botched handling of its free school meal (FSM) voucher scheme.

First, a raft of retailers, including the Co-op and discounters Aldi and Lidl, were refused permission to take part in the government’s flagship scheme. Now, according to supermarket leaders, schools are being put at financial risk if they choose to take part in an alternative scheme set up to fill the gaps.

So how did the plan come off the rails? And does it add weight to justification for an inquiry into the government’s handling of the hunger crisis during the coronavirus pandemic?

The vouchers scheme has been dogged with problems since its launch in late March.

Controversy over the awarding of a £234m contract, without tender, to French provider Edenred, was followed by a catalogue of technical problems, which saw schools and parents face long waits to receive the £15-a-week vouchers.

A subsequent investigation by the BBC found some parents of the estimated 1.3 million eligible children in England had been turned away at supermarket tills because the vouchers did not work.

In the latest twist, supermarket leaders have slammed the Department for Education for what they claim is one of the worst incidences of incompetence during the coronavirus outbreak to date.

Despite what The Grocer has been told was “weeks of furious lobbying”, DfE officials and Edenred refused to allow the discounters and the Co-op to take part in its scheme when it launched, citing technical incompatibility. However, in a questionable move considering the demographics involved, it did involve upmarket M&S and Waitrose.

Aldi was eventually accepted in a second wave of the plan, along with c-store chain McColl’s, though not until almost the end of April.

Lidl, on the other hand, was told by Edenred it was not compatible with its systems. Industry sources allege there has been “very little explanation” as to why it is still not allowed to take part.

The Co-op, sources argue, is an even more shocking omission, considering its unique position as the only food retailer in many isolated communities.

The Grocer has learnt the Co-op contacted the DfE in mid-March to make it aware of plans to provide a gift card scheme for pupils eligible for free meals in 25 schools within the Co-operative Academies Trust.

That scheme, which is still running, was mooted by the Co-op as a model for a much wider rollout before the Edenred scheme was launched. Yet it was rejected by Edenred, once it got the contract, on the grounds that other co-operative societies only offer a paper voucher. Edenred argued the scheme would only work if there was a single solution for all co-operative food retailers.

The Co-op’s case for inclusion was taken up by a number of opposition MPs and eventually put before the Education Select Committee.

On the back of the announcement, the Co-op launched its scheme nationally. Yet the Co-op claims schools taking part in its scheme now face being penalised by government.

It is claimed some schools who have bought vouchers from the Co-op are being told they cannot include the purchases in claims for exceptional costs resulting from Covid-19.

“DfE officials have now made it clear that schools that expect to be able to add to historic reserves will not be eligible to claim for full reimbursement if they use the Co-op gift card scheme,” says a Co-op spokeswoman.

“Many schools have told us the Co-op Group has been the only reasonable choice for their families during the pandemic so we would like to see all schools reimbursed up to an agreed limit, irrespective of whether it uses the national voucher scheme or an alternative solution, such as Co-op gift cards.”

BRC director of food and sustainability Andrew Opie says the episode is “one of the biggest disappointments of the whole Covid incident”.

In particular he highlights “the lack of willingness from both the DfE and its providers to work with the retailers to find solutions,” he adds.

“These are stores that were very willing to help. They’ve gone out of their way to try to find a workable solution that would be acceptable to government, as well as preventing fraud.”

ACS chairman James Lowman says the insistence on stores having the exact same voucher system in place has also meant thousands of c-stores could not take part in the scheme, including many symbol operators.

And he accuses the government of being “very slow” in responding.

“We ended up with a system where schools can support their families, but at a cost to the school,” he says. “It needs to be rethought quickly.”

Edenred says the FSM vouchers scheme has seen more than £139m of supermarket e-gift cards issued to families and schools since the launch.

“The number of schools who have placed orders on the FSM voucher scheme has now grown to over 17,500,” it says.

“Parents and schools face minimal or no waiting time when ordering online. The scheme continues to get easier and faster to use, putting supermarket vouchers into the hands of thousands of families and schools.”

The DfE insists schools are reimbursed for costs incurred where the Edenred scheme is not suitable, including where participating supermarkets have no branches nearby.

After announcing the controversial scheme would not be extended over the summer holidays, the government is also facing the possibility of legal proceedings from campaigners who say it leaves over a million children at risk of hunger.

As the episode drags on, it is far from the only target of criticism in the government’s response to Covid-19 and hunger.

Last month, supermarket bosses told The Grocer of their anger over its alleged slow response to dealing with upwards of 20 million vulnerable adults at risk of hunger during the crisis, accusing ministers of relying on online grocery capacity that simply did not exist.

Campaign groups say any future inquiry into the handling of the crisis must be extended to include how the nation feeds itself at a time of crisis, and how the response to that need has gone so wrong.

“The government said last week ‘we will work around the clock to ensure nobody goes hungry’, but in our view its policies and decision-making during the pandemic have failed to acknowledge five million people are now struggling for food due to financial hardship, including hundreds of thousands of children,” says Sustain CEO Kath Dalmeny.

With so many children caught up in the crisis, arguments over which retailers are allowed to help seems the last thing that should be on the menu.

How the voucher scheme works