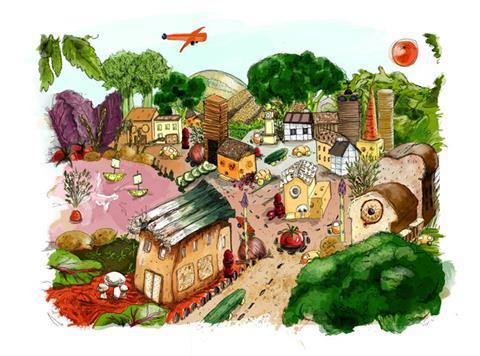 This illustrations, depicting a town made of the most common food waste items, has been created to mark Sainsbury’s new Waste Less, Save More initiative

Sainsbury’s is launching the first of its kind £10m project to tackle household food waste and is looking for a UK town to test out its new project.

The ‘Waste Less, Save More’ initiative launched today (21 September), with the supermarket also looking to invest £1m into a UK town from 2016 for it become the “test bed for innovation” to discover which initiatives help reduce household food waste.

Findings and recommendations from this trial phase in year one would be developed and made public in subsequent years, the retailer said, with the final phases of the project continuing to roll out and reduce other forms of waste.

Household food waste is an escalating issue, with 7m tonnes of food and drink wasted annually, and the average family throwing away £700 of food per year.

This is just under half of the 15m tonnes of food wasted in the UK, according to Wrap’s Household Food and Drink Waste in the UK 2012 report.

Sainsbury’s said it was looking for a trial town that had a population of between 15,000 and 300,000 and a Sainsbury’s store within a five-mile radius.

A spokeswoman for the company told The Grocer: “Anyone can nominate their town, though we recommend joining forces with a local community group, such as a PTA and others, in order to share ideas and demonstrate strength of community commitment.”

The company said the town must also demonstrate a “strong sense of community” and “be keen and willing to work together to tackle food waste”.

The spokeswoman explained that Sainsbury’s would specifically be looking for towns that have already shown an interest in this area.

This may include them having held events or have groups that take an active interest in reducing food waste. “We’ll also be looking for innovative ideas from the town that we could put to the test”, she added. The winning town will be announced on 1 December.

Sainsbury’s will work together with the town to devise a year-long investment plan. The company said this might include new innovations such as ‘talking bins’ that give tips as rubbish is put in them, or by creating new packaging to keep products fresher for longer.

Mike Coupe, CEO of Sainsbury’s, said: “We know that waste - and particularly food waste - is a big challenge for households across the UK and it’s something our customers really care about.

“Investing significantly in this area clearly demonstrates the scale of our ambition over the next five years and shows just how committed we are to helping our customers make a real difference in this area. We’re confident that the project, which will start with trialling and testing in one UK town, will result in positive change for many more.”

Rory Stewart, the environment minister, added: “Everyone has a role to play in reducing food waste and I congratulate Sainsbury’s for looking at innovative solutions to address this nationwide problem. Waste Less, Save More is bringing together a major retailer and communities to generate new ideas to tackle this issue. I look forward to seeing the successes from this scheme.”