Stay within the Groceries Code's spirit 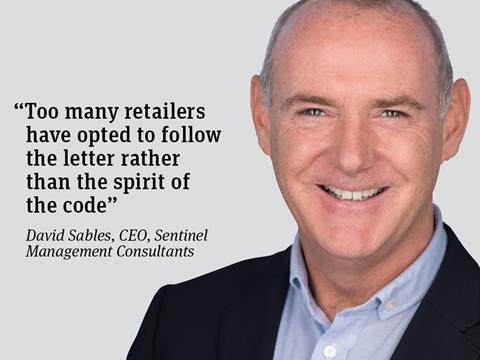 Across the country, sole traders are desperately trying to keep their income below the £85k VAT threshold to avoid slapping 20% on their prices and the quarterly admin task. The £1bn sales mark must put a similar dread into retailers now on the GSCOP radar, like Boots, Holland & Barrett and McColl’s. Contribution to funding the GCA office, compliance officer and staff training are burdensome enough, but the fact they will have to start abiding by GSCOP will drain margin too. The Code increasingly matters to retailers who are constantly being rapped and look who is the latest: the Co-op. Surely not!

It’s great to have the GCA cropping up with a shot across the bows once in a while, but there has never been a penalty fine. The 1% turnover teeth are there but there has been no willingness to bite. On many occasions, Code contraventions have resulted in an enforced repayment to the supplier. Arguing that a penalty fine goes straight to the Treasury has been a preference of the GCA. I say she can do both. Too many retailers have opted to follow the letter rather than the spirit of the Code, staying aggressive within the vagueness of its wording. The Co-op investigation provides a perfect opportunity to display the full power and commitment of the GCA. The Co-op knows it has crossed the line and has apologised. Importantly, the GCA is now focusing on the culture that led to the contraventions.

This investigation covers areas that come down to timing and the Code looks for fairness on a case-by-case basis. The Co-op has been late in communicating its delists to suppliers, with four to six weeks being typical. This may be due to new systems and/or complicated targeting against new store demographic clusters, accompanied by its slow hierarchical decision-by-committee processes. Already, the Co-op has got kid gloves on and is tenderly asking suppliers if the timing affects their costs. This difference in behaviour happened overnight. Hooray for the GCA!

The non-governed retailers just under the threshold have been the worst offenders on many Code areas. As they get their houses in order, I recommend they focus on matching their culture to the spirit of the Code to stay out of trouble.