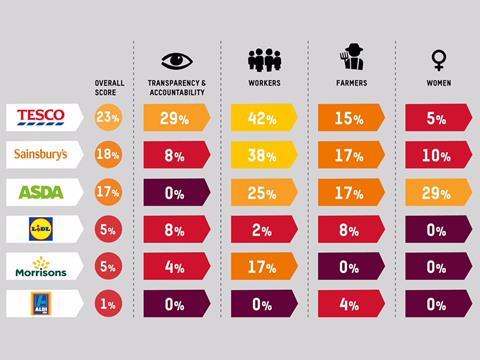 Oxfam has rated Tesco as the most transparent and accountable UK supermarket for protecting the workers in its global ­supply chain.

The UK’s biggest ­supermarket, alongside second-placed Sainsbury’s, was “head and shoulders” above the rest, according to a balanced scorecard produced by the charity.

However, the report said all supermarkets needed to do more to improve their practices and transparency on areas such as the treatment of workers, farmers and women, and vowed to embarrass supermarkets into action by continuing to publish the table.

It warned the trend towards increased buying power, exemplified by the proposed Sainsbury’s-Asda merger, could see workers not just in the UK but in Africa, Latin America and Asia come under increased strain.

Oxfam’s report scored Tesco 29% for transparency and accountability, 42% for treatment of workers, 15% for farmers and 55% for women, with an overall score of 23% based on more than 90 criteria.

Oxfam used information on the company’s websites about their actions on human rights to score each one.

“While there are powerful trends pointing towards greater consolidation of supermarket power in the UK, likely to mean inequality in supply chains will continue to grow, there are also key opportunities for change that could set the sector on a different path,” said the report.

“These include a reform of company law to tackle short-termism, a radical increase in ­supply chain transparency, transformative action on gender equality and sexual harassment, and using membership of the Ethical Trading Initiative to drive deeper change, including, through ­advocacy, to raise ­minimum wages and price floors.”