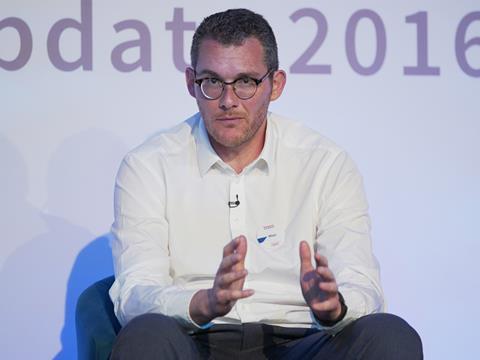 Tesco’s UK and Ireland CEO Matt Davies urged all food and drink suppliers to back the 12.3 initiative

Tesco has called on suppliers to do more to tackle food waste by signing up to the UN Sustainability Development Goals.

Speaking at the IGD Big Debate today, UK and Ireland CEO Matt Davies urged all food and drink suppliers to back the 12.3 initiative, which calls for food waste to be halved by 2030, and called for all retailers and manufacturers to publish figures on how much waste they generate.

“Wasting good food is obscene,” said Davies. “It offends every person in this room.

“It’s despicable the amount of food that’s thrown away, and that we’ve not been able to work together to minimise waste” but “the UN has some very clear sustainability goals and I ask you to sign up”.

Three years ago Tesco became the first retailer to publish a full breakdown of its food waste data, with the latest figures (for 2015) showing a 4% rise year on year. Then last month Sainsbury’s followed suit, sharing its total annual surplus. No other food retailer has yet done the same.

“Get it measured. By measuring it and understanding it, we will reduce it,” Davies added.

He also revealed that Tesco has donated the equivalent of 49 million meals to food banks and local charities over the past four years through its two food redistribution programmes - Neighbourhood Food Collection, which collects customer food donations, and Community Food Connection, which shares surplus food from Tesco distribution centres and large stores.

“Now that’s a hell of a contribution, but there’s more we can all do,” he said. “That’s why we’re rolling out Community Food Connection to all our stores by the end of next year, to make sure no edible food goes to waste.”