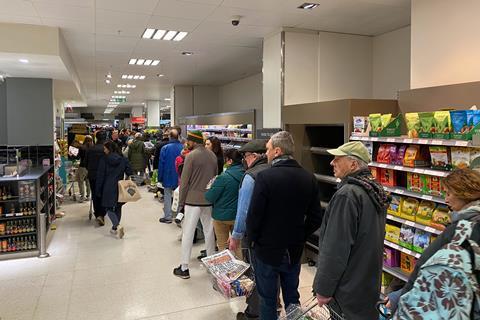 Waitrose sales have soared 8% on the back of shopper demands amid the coronavirus panic, but owner John Lewis Partnership warned this morning of a significant slump in John Lewis business.

A strategic review of the group, announced by new chairman Sharon White in March alongside the annual 2019/20 financial results, is to be accelerated to take account of changes in consumer behaviour to come out of the pandemic. This includes a more pronounced shift to online and a desire to shop in more sustainable ways.

The review of former chairman Charlie Mayfield’s controversial Future Partnership restructure, which has tried to align the Waitrose and John Lewis brands more closely, will now be “substantially” complete by the summer.

White added in the trading update she would also take a 20% pay cut on her £990,000 annual salary, starting in April, to help the group maintain cash reserves during the crisis. The pay cut – which will also be taken by the rest of the executive team, as well as non-executive directors and independent directors – will initially last for three months.

“This is a time of great uncertainty and volatility and the full-year picture is impossible to predict,” White said.

“We are therefore looking at a range of different possible outcomes and how these might affect profits, sales and cashflow. We are confident that the future of the business is strong. Our short-term trading has though been significantly affected, principally because of the closure of all 50 John Lewis branches.”

However, the partnership added operating costs had increased, especially as a result of unprecedented demand for e-commerce, with Waitrose increasing capacity by 50% during the outbreak.

While sales jumped at Waitrose, business at John Lewis crashed 17% year on year since the middle of March – and 7% since 26 January – as a rise in online sales was not enough to offset the closing of all 50 department stores after lockdown was announced on 23 March.

The group said its worst-case scenario for the 2020/21 financial year assumed significant sales decline between April and June, and “weak sales thereafter”, leading to a 35% annual slump in John Lewis revenues and a more modest fall at Waitrose of less than 5%.

It comes on top of a slowdown in sales for John Lewis in 2019/20 – announced in March before the coronavirus crisis escalated – which led to a heavy fall in group profits and the lowest annual staff bonus for 67 years.

JLP started the new financial year with just more than £900m cash in the bank and access to a further £500m of lending capability. Six weeks into the crisis, the group added it was holding “broadly the same” level of cash and investments.

The group said the 12-month business rates holiday announced by the government would save about £135m this financial year, with deferred VAT payments until March 2021 also helping short-term cashflow.

Other steps taken by the board to preserve cash include:

“With these actions and continued close attention, I am confident that we have sufficient cash to operate successfully through a broad range of potential scenarios,” White said.

“The partnership has been trading for nearly a century. It has survived a world war and bombings, economic crashes and crises. Thanks to you, we shall also come through Covid-19 too and emerge stronger.”