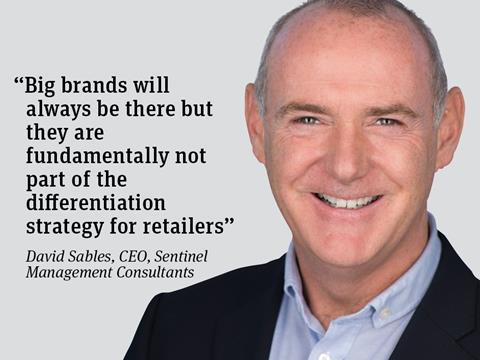 Every second TV ad is an insurance price comparison and the vast majority of policies are switched and sold that way - on price. This has been terrible for insurers but that’s how they now have to operate. Food should not be like that, of course, but it is heading that way with the in-store apps and till comparisons we now see.

Given the pinch consumers have felt and the solution presented by smartening discounters, there has been a natural focus on price. This was then compounded by desperate supermarkets throwing incoherent deals at the problem, destroying trust and in effect removing promo as a pricing lever. But price cannot be the answer for the big four. Ultimately that would play further into the hands of the lean, no-nonsense discounters.

For major retail there is little to be stolen from independents and the Co-op is growing so the sources of share gain have dried up. Winning shoppers back into the big four requires differentiation or price is all that’s left.

So who can help the big four to differentiate? At the moment the answer is not in the big brands or the big lumbering suppliers who are so unresponsive to retail opportunities. The big data only they can afford may help targeting, but if it slows down the dynamism of a business it is counterproductive.

The winners today are the small dynamic innovators who are prepared to work on exclusive offerings. Big brands will always be there but they are fundamentally not part of the differentiation strategy, which is the live or die retailer agenda.

Working fast can help. Who says a big company can’t be fast? They just don’t tend to be. It’s a function of being too rich, too ‘clever’ and too risk-averse. Retailers have always been faster to act than suppliers as when something fails they half-price it through and nothing is lost.

Suppliers need to put their internal agendas to one side. If you’re small and dynamic get in there and deliver. If you’re big and branded, perhaps look to a second tier of exclusive offerings to sit alongside the flagship brands. Mitigate the risks of acting fast by negotiating contingency plans with the retailer - try not to just put the same product in differentiated packaging.