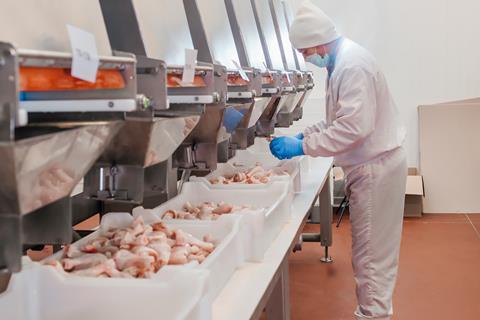 I was recently one of the co-signatories on a letter from the Road Haulage Association to PM Boris Johnson, drawing attention to the shortage of HGV drivers in the UK. Before the pandemic, it was estimated there was a shortage in excess of 60,000. But several factors – including lockdowns, Brexit and an aging workforce – mean the number now stands at more than 100,000.

It’s certainly been a headline-grabber, with column inches dedicated to the tonnes of food rotting in depots with no drivers to transport them. That the effects of the driver shortage are crippling is no understatement, but behind the headlines there are other, equally worrying labour shortages being endured across the food industry.

The BFFF recently held a round table with its members which uncovered some shocking problems that are not receiving the same kind of media or political attention. While most of those who took part are being affected by the driver shortage, food businesses are also struggling to fill managerial and skilled technical positions.

Engineering is a particular issue, with reports of local bidding wars for engineers and salary rates for these roles quickly escalating. One of our members has already spent around £30k on recruitment fees in 2021 for engineering alone.

Another issue is the inability to recruit manual skilled labour for food production, which is is a real stumbling block to getting back to pre-Covid manufacturing levels. But it’s not just food producers suffering from staff shortfalls. While customers have returned in droves to the hospitality industry, many staff members have not. Chefs, for example, are proving difficult to recruit, and businesses are being forced to invest considerable sums on in-house training to compensate.

One approach to mitigating staff shortages is to use agency staff, but they lack the same level of skill as more established colleagues and are a costly option, so this is not sustainable. And while Job Centres are actively promoting the Kickstart scheme, which provides funding to employers to create jobs for 16 to 24-year-olds on Universal Credit, many are finding it full of hidden costs and almost impossible to access candidates.

Alternative funding is available, but proving exclusionary for some. Inexplicably, the meat sector is not eligible for either the government’s agricultural seasonal workers scheme or the lifetime skills guarantee, in which food is not one of the recognised categories.

This is of huge concern, as a high number of European staff, who have been the mainstay of our workforce for years, have either returned home or plan to in the near future.

Restrictions on foreign workers must be reduced to allow suitable people to come to Britain to work in areas where there are labour shortages. I would like to see government give workers in food manufacturing a place on the list of skills that have a derogation under the new EU immigrations rules for a set period of time, and extend settled status to give EU citizens greater certainty and slow the outflow of workers.

Furthermore, the levels of incentives for companies to take on apprenticeships needs to be significantly greater in skilled areas, as the rules preventing their activities before qualification significantly limits their ability to contribute.

Food roles should also be included in the lifetime skills guarantee scheme, and there needs to be greater flexibility in how the apprentice levy can be utilised. The kickstart scheme should also be accessible to a wider pool of under-25s with less criteria and restrictions.

It is time for government to recognise in order to fuel a post-Covid economic boom, the food industry must have access to an available workforce in all areas of the supply chain.