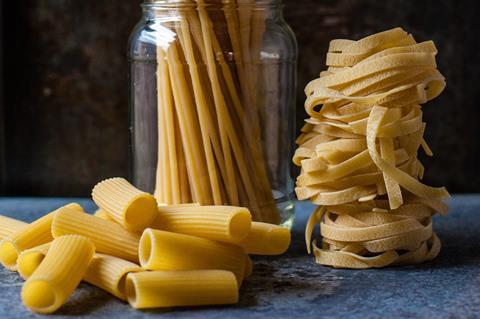 “The pricing is unbelievable. It has absolutely rocketed”, said one supplier.

Shoppers could be forced to swallow price rises for pasta over the coming months thanks to poor global supply and rocketing costs in the supply chain.

Industry sources warn prices for key pasta ingredient durum wheat have surged because of dwindling supply in Europe and Canada. The UK grows very little of the wheat itself.

Droughts and soaring temperatures have hit US and Canadian crops this year, while in Europe crops have been damaged by heavy rain.

Last month saw the US Department of Agriculture forecast 2021 US durum wheat production down 46% on 2020, while this month saw France’s pasta manufacturers union Sifpaf and the French Committee of industrial semolina (CFSI) warn that just 7.3 million tonnes had been harvested in Europe this year – significantly below the 9.5 million tonnes that would have been required to meet current demand.

In Canada, which exports some two-thirds of the world’s supply, the harvest had come in at less than 4.2m tonnes – 32% lower than the average over the last five years, and 30% smaller than Canada had forecast, according to data from StatCan.

“North American durum crops are being battered by arid and hot conditions, which hit the country during late June/early July,” said Mintec analyst Alana Barros. “Tight supply and reduced stocks, especially in Canada and the USA, the world’s largest suppliers, are likely to weigh significantly on the durum availability in the global market, thus supporting global prices.”

In Italy, frosts in early spring and subsequent dry spells had ”significantly reduced the potential for increased yield amid also deteriorating crop quality”, she added.

“Also, the tight situation in North America is expected to exacerbate supply tightness in Italy and around Europe, as the EU is a significant importer of durum wheat from the region, which is estimated to continue supporting the upward price pressure on prices in the short term.”

As a result prices had risen by upwards of 30% in a matter of weeks, warned Sifpaf and CFSI, adding that once Canada finished harvesting, prices could surge even higher.

Indeed, according to Mintec data, Prices for Canadian durum reached a record high of C$567.8/mt in August, a rise of 33% month on month and 41% year on year. Italian durum prices hit a multi-year high of €381/mt - their highest price since January 2015.

The effects are now beginning to hit UK food and drink firms. A UK pasta supplier said: “The pricing is unbelievable. It has absolutely rocketed – we’ve never seen it at this level.”

Filippo Berio MD Walter Zanre said there was “huge tension on the supply of wheat, and suppliers will not deliver unless higher prices are paid.

“The situation has literally exploded as Italy returns from the August break. Pasta producers are in panic mode.”

Some suppliers are reneging on contracts, Zanre added.

A second source in the UK pasta industry said: “We haven’t seen any direct impact on us yet but we’re keeping a very close eye on this. We haven’t got [price rises] on our doorstep but it looks like they’re coming.”

“Italian suppliers are telling us inflationary pressure is 15-20% and we have heard some farmers are breaking contracts with millers unless they pay the increase, and this is continuing down the supply chain.”

“We’ve picked up that processors and brands are forcing through price increases to Italian retailers and we’ve started to get a hint that suppliers are doing the same.”

It was likely much of the cost of these hikes would ultimately be passed on to shoppers, said the first source.

“I cannot see how, in such a commoditised industry, it is not going to impact the consumer. We are not going to be able to swallow those kinds of increases.

“Compounding the pressure was the fact that demand for pasta had significantly grown, not just in the UK but across the world over recent years,” they said.

“We have seen much more of the developing world begin to consume pasta and suppliers are being set up in those parts of the world.”