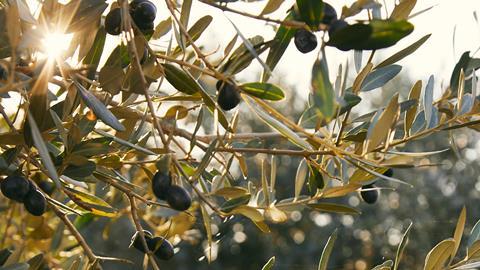 Xyella fastidiosa – colloquially known as olive leprosy – is a threat to olive oil supplies in the Mediterranean. At the 70-hectare Filippo Berio olive grove in Tuscany, they’re searching for a cure

There’s an Italian killer on the loose. But don’t panic, it has no interest in humans. Olive trees are its prey, its calling card a mass of foamy bubbles left on the leaves or branches of its victims.

“This is the criminal,” says Fabio Maccari, CEO of Filippo Berio owner Salov, pointing to an image of a tiny brown insect known as a spittlebug in the UK. While spittlebugs are harmless in Britain, over in Mediterranean Europe they can be deadly to olive trees. That’s because of the bacteria carried by certain species: Xylella fastidiosa.

To demonstrate the sheer level of damage this can cause, Maccari taps ‘Xylella fastidiosa’ into Google. His screen displays photographs of barren groves of skeleton trees, left stripped of their leaves and fruit. “This is what happens,” he warns. “The entire olive grove is dead.”

Since its initial detection in Italy in 2013, Xylella fastidiosa has infected an estimated 20 million of the nation’s 150 million olive trees. What’s worse, there is no treatment. Infected trees must be removed and destroyed to slow the spread of the disease, colloquially known as ‘olive leprosy’.

That’s why Salov has teamed up with the Italian national research council (CNR) to find a cure at the Filippo Berio olive grove in Tuscany. The project is part of the EU’s ‘Life Resilience’ initiative, which is looking to halt the spread of the bacteria. Lead researcher Claudio Cantini effectively uses the 70-hectare site as his “open air laboratory”.

There, the team can work relatively unhindered. In a typical year, the grove produces just 10,000 litres of olive oil for Filippo Berio, which largely relies on olives from different groves across Europe. And it’s small fry in the context of Salov’s global business, which has a yearly bottling volume of 120 million litres.

The olives harvested and pressed at the Filippo Berio grove produce 10,000 litres of olive oil a year

Drones provide researchers with a live update on plants’ status

The research was formed under Salov CEO Fabio Maccari’s leadership

An ‘endorsement of what we do’

Yet the site remains important for different reasons. When Maccari took the helm at Salov in 2018, he decided to revamp the olive grove’s adjoining villa into a meeting place for stakeholders and employees.

After drawing up renovation plans for the villa – including several guest rooms and a 100-person conference hall to be built in 2024 – he decided the surrounding olive grove should be used “for something useful for our category and as an endorsement of what we do”. So Maccari met with Cantini and established a long-term research partnership.

Since beginning their work, the CNR researchers have identified ancient olive tree varietals that are resistant to Xylella. Having discovered an Italian variety that is naturally immune to the disease – Leccino – they are mixing this with other Italian, Spanish or Greek varieties.

Researchers are also investigating how altering the ecosystem of the grove could halt the spread of the disease. This involves planting sectors of “specific grass that is hostile to spittlebugs”.

Still, this isn’t the only bug to represent a threat to olive trees. The team is looking at olive flies, for instance, which lay their eggs inside the fruit. When the larvae hatch, they feed on the olives.

To monitor the parasites, the researchers have installed high-tech fly traps, coated in pheromones – or what Maccari calls “the sexy part of the lady fly”.

“The male flies are attracted and get stuck, and you count them”, Maccari explains. These traps are kitted out with cameras, so CNR researchers can monitor pest levels remotely.

It’s all part of a close monitoring operation. Weather stations record the heat and humidity levels in the grove. Meanwhile, drones take photos to provide researchers with a live feed on the status of the plants.

Maccari believes precision agriculture is the “last frontier” in olive farming. He’s determined for Salov to stay at the forefront of research – so much so that the Filippo Berio grove is now the subject of six separate projects.

While there’s no immediate financial gain from the research, Maccari recognises the importance of its legacy. For him, it is his “contribution to the cause of modern olive agriculture”.