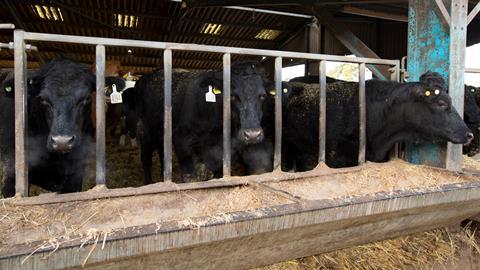 Who’s to blame for the crisis facing Britain’s beef sector?

UK supermarkets were hit by beef shortages last week, in the wake of farmer protests over low returns from processors. And while those protests were in Ireland, tumbling farmgate prices and shrinking profit margins have also pushed UK beef farmers to crisis point, according to NFU president Minette Batters.

Beef prices were “completely unsustainable” and “well below the cost of production”, she warned ahead of a meeting with farming minister George Eustice on 30 September. So why are prices so low, and what does all this mean for British shoppers?

Irish farmers and processors have now reached a deal, meaning supply shortages should be short-lived. But unless something is done to address low returns in the UK, there could be longer-term consequences for domestic beef, suggested Batters. “We will start to see people leaving the industry.”

You can see why. Average deadweight steer prices hit a three-year low of £3.48/kg in June [GB R4L price, AHDB]. And they’ve continued falling since, hitting £3.35/kg in mid-September. That’s 7% below last year.

The cause of this crisis has provoked fierce debate. And while the intensity of the situation hasn’t yet reached the levels seen in Ireland, there is growing unrest among UK farmers, says NFU chief livestock adviser John Royle.

Consumer demand for fresh beef is largely stable, with volumes down just 1.2% [Kantar 52 w/e 14 July]. And low farmgate prices don’t appear to have been passed on to shoppers, with average prices down just 0.3% over the same period.

Farmers are asking why that relative stability hasn’t been reflected at the farm gate, says Royle, who warns things could become much worse once backlogged Irish stock held up by the protests enters the market.

“Farmers are concerned about this and a general lack of competition among the major processors,” he adds.

Some of the downward pressure on farmgate beef prices can be attributed to oversupply after Brexit stockpiles built up ahead of March were released back onto the market.

However, processors have also been accused of keeping prices low by sourcing from both the UK and Ireland. It means UK beef self-sufficiency remains stubbornly around the 75% mark, despite UK farmers having the ability to ramp up production, Royle claims.

Processors take a different view. Last month, the British Meat Processors Association claimed the situation was caused by a “perfect storm” of “artificially low retail prices” and an increase in supply, coupled with a decrease in demand “that can’t be shouldered solely by meat processors”.

BMPA CEO Nick Allen cites the popularity and low retail price of beef mince as a key driver. “About 55% of meat sales is made up of mince, at very tight margins,” he says. With demand for prime cuts under pressure, this makes it difficult to make a profit out of beef production, he suggests.

According to BMPA research, UK farmgate prices are actually the sixth highest in Europe, while retail prices are only 21st highest. “The problem is consumers expect cheap food,” Allen adds. “We need discussions with retailers about whether they need to keep driving the price of mince down.”

Those serious discussions could soon be on the cards. Eustice has committed to further develop plans for a compulsory code of practice to improve transparency around beef pricing and an industry summit is set to take place “hopefully before Christmas”, says Royle.

With the sector at loggerheads and no sign of farmgate price rises any time soon, brokering a peace deal could be crucial in keeping meat on the table.