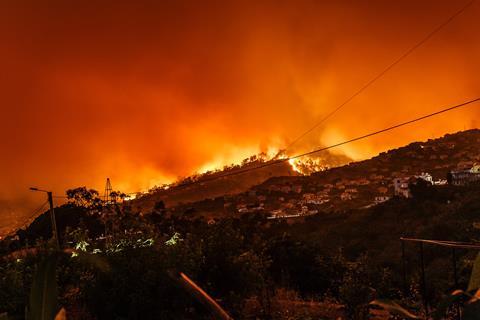 Forty per cent of all plants are at risk of extinction, with species being lost before they can even be named

The food industry has not done enough on climate change or promoting biodiversity and regenerative agriculture. Of the millions of plant species, only nine account for two-thirds of all food production. This agricultural monoculture has crowded out biodiversity. Topsoil is required for 95% of all food consumed and contains a quarter of the world’s biodiversity, yet one third has been degraded. One third of forests have disappeared and during this August alone, there were circa 30,000 fires in the Amazon and land equivalent to eight times the size of London has burned.

The State of the World’s Plants report, which was presented to the UN this week, highlighted that 40% of all plants are at risk of extinction. Species are being lost before they can even be named, and it’s not just food – more than 700 plants used for medicine are at risk of extinction. Westernisation of food trends has reduced choice and resulted in micronutrient deficiencies in 30% of the world’s population. Ultimately this is a problem for the entire food industry, because without guaranteed security of supply, there is no business. Fundamentally, the market needs to reassess how it values biodiversity – it is extracting $125tn in benefits from ecosystems annually.

Biodiversity and climate change go hand in hand. Danone’s CEO, Emmanuel Faber, said we have 10 years to bend the curve on climate change and biodiversity loss. Progress has been made in areas such as raw material traceability, encouraging sustainable practices and investing in alternatives such as plant-based brands and green chemistry, but much more needs to be done.

There have been two positive developments in recent weeks. First, at the UN, Chinese President Xi Jinping committed China to become fully carbon neutral by 2060 (with peak CO2 emissions reached before 2030). Given China is responsible for a quarter of greenhouse gas emissions, this would be significant (if delivered) and by itself could reduce global temperatures by 0.2-0.3 degrees, according to Climate Action Tracker. The second was the EU announcement that it will go further and faster on greenhouse gas emissions, raising its ambition to deliver 55% emission reductions by 2030.This should raise the price of carbon and incentivise innovative low/no carbon industries.

Consumers have a big part to play and the growth of plant-based food is encouraging. Tesco is targeting a 300% increase in plant-based meat by 2025. Meat and dairy provide 18% of our calories, 37% of protein, but use up 83% of farmland.

We see Unilever as a sector leader in climate and biodiversity. Its decision to accelerate its target for carbon neutrality from 2050 to 2039 shows real leadership. Its bold actions should be a wake-up call to the wider industry. Unilever highlighted that only 1% of its greenhouse emissions come from its own manufacturing footprint, but two thirds stem from downstream consumer activities that it has little direct control over, with another quarter from upstream activities, mainly buying commodities where it has more ability to drive change. It is putting its money where its mouth is, recently announcing a €1bn commitment for a 10-year climate and nature fund which will invest in ecosystem restoration, and a further €1bn to source all carbon in its household/laundry unit from renewable sources.

The full costs of carbon neutrality have not been quantified by the fmcg industry. Nestlé has hinted it will be a very sizeable cost that could crimp its longer-term margin expansion. Unlike the big companies, smaller ones are less likely to have the financial resources to make the necessary investments, especially in a Covid-driven recession. However, kicking the can down the road doesn’t solve the issue, and is not a strategy. Consumers will increasingly demand companies comply and will vote with their wallets, given that in future companies will need a licence to operate.

Retailers are taking more interest and that could be the catalyst. Amazon recently launched its Climate Pledge Friendly initiative, which will help consumers make more informed choices. Those that don’t pass the stringent sustainability criteria will find it harder in future to be at the top of their algorithm. There is no hiding place – disclosure and levels of transparency required are only going one way.