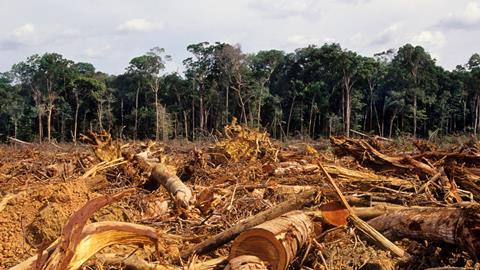 Supermarkets and NGOs have arrived at a ‘landmark alignment’

Tackling deforestation in food commodities is tough: the landscape is littered with unmet pledges and commitments. Nowhere is this more true than in soy, where only 15% of global supply can be confirmed as deforestation-free.

Hope for change is rising however, after a new “landmark alignment” between supermarkets and NGOs set out a roadmap for moving the industry towards deforestation-free soy.

“If implemented, it could bring retailers a step closer to delinking meat sales in Europe from forest destruction in South America,” says Robin Willoughby, UK director of Mighty Earth.

So what does the roadmap look like? And can supermarkets pull it off?

The plan emerged this month from the Retail Soy Group, made up of major British supermarkets and environmental groups including the WWF, Global Canopy and Mighty Earth. It set out to unite voices behind a common vision: what sustainable soy sourcing looks like and what steps are needed to get there.

According to the roadmap, every company should have effective policies for sustainable soy which include a cut-off date (August 2020 at the latest) after which the legal or illegal conversion of natural ecosystems is prohibited.

Sourcing transparency should be provided by each actor in a value chain.

Deliberately excluding suppliers or regions at risk of deforestation should be avoided if possible. Engagement must come before exclusion.

Since the drivers of deforestation are systemic, collaboration is essential to stop it.

Promoting sustainable diets and diversifying ranges should be prioritised.

On this, at least, it has achieved its goal. Both supermarkets and NGOs are now united behind the roadmap and its five principles. These range from boosting supply chain transparency to a universal commitment to a cut-off date of August 2020, after which any conversion of natural ecosystems is prohibited.

Vitally, supermarkets will move away from soy certification schemes – criticised in a recent Greenpeace report as “enabling destructive businesses to continue operating as usual” – and insist on verified deforestation-free soy. For this, the onus will be on traders such as Cargill and Bunge to tell their customers exactly where their soy was grown.

While soy bought indirectly via other sources is not as easy to trace, traders must in turn push their suppliers for more transparency, says Will Schreiber, a Retail Soy Group representative and partner at consultancy 3Keel. “We need to get these basic commitments on transparency cascading through the value chain.”

Whether traders accede to such demands remains to be seen. As Willoughby points out, “until now, powerful Brazilian agribusiness companies have refused to accept any conditions in their purchasing of soy from farmers in deforestation hotspots such as the Cerrado.”

An acknowledged hole in the roadmap is what supermarkets will do if such refusals continue. All parties now agree that dropping offending suppliers should only be a last resort. “High-risk producers and regions must be engaged as a priority, before any exclusions are considered,” says the report.

Even then, “egregious or consistent breaches may require temporary action,” says Schreiber, though “temporary is the key point here. Companies should still be active in trying to remediate and reintegrate.”

The scale of the challenge in soy is vast. Two thirds of soy fed to pigs, one third of soy fed to chickens, and 99.8% of soy fed to beef is currently not evidenced as deforestation free, according to 3Keel. Transparency has risen slightly over the past year, but unsustainable, untraceable soy remains a major problem. “It is a huge leap that has to be made,” admits Schreiber.

Yet the roadmap stresses it will be underpinned by a fundamental shift in mindset. No longer should companies look to “develop niche supply chains” that deliver deforestation-free soy for their products but ignore the wider problem. Instead, they must activate every actor in the supply chain to be an effective agent of change. The time has come to turn talk into action.