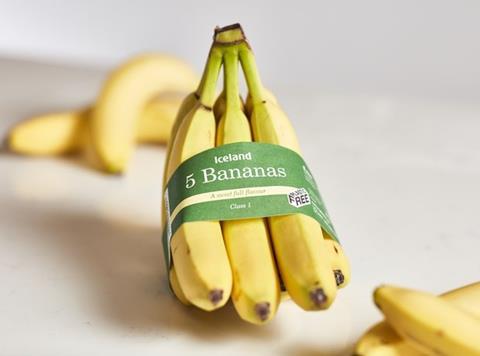 The move will save 10 million plastic bags a year, said the retailer

Iceland has introduced plastic-free packaging for its pre-packed bananas, a move the supermarket chain says will save 10 million plastic bags a year.

The discounter’s pre-packed bananas will now instead be wrapped in a recyclable paper band.

The new packaging has been launched in three stores in an initial trial, according to Iceland. It’s set to extend to 120 stores later this week before a national rollout by the end of the year.

In January, Iceland committed to banishing plastic from all own-label packaging by 2023.

“This move alone will have a significant impact on our plastics consumption and is one of the first of many solutions that are in development,” said Iceland’s managing director Richard Walker. “Our customers support our move to reduce single-use plastic and we are pleased to share this important milestone, with many more to come.”

Last week Waitrose introduced new band-style packaging for its Duchy original organic bananas but the band is still made of plastic and not yet recyclable.

Iceland claims to have already removed 850 tonnes of plastic per year from its own-label packaging, including replacing black plastic with paper-based trays for frozen meals.

The new banana packaging will bear the Plastic Free Trust Mark, launched by campaigners A Plastic Planet earlier this year.