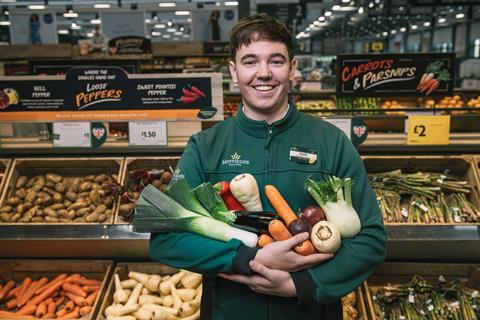 The ‘buy bagless’ fruit & veg shelves would save an estimated three tonnes of plastic a week, the retailer said

Morrisons is to launch dozens of plastic-free fruit & veg areas, after a trial found it could boost sales of loose fruit & veg by as much as 40%.

The retailer said it had seen a big spike in loose sales in a 10-month trial in three Morrisons stores in Skipton, Guiseley and St Ives. It expected to see a similar switch from bagged to loose with the trial being extended to 60 stores this year.

Morrisons customers will be able to choose up to 127 varieties of fruit & veg to either buy loose or put in recyclable paper bags.

The retailer said it estimated the new ‘buy bagless’ fruit & veg shelves would save an estimated three tonnes of plastic a week, equating to 156 tonnes a year.

As well as the 60 stores this year, Morrisons said more aisles would be introduced as part of the supermarket’s ongoing store refurbishment programme.

Morrisons has pledged to remove 9,000 tonnes of unnecessary plastic each year, taking 600 tonnes of unrecyclable polystyrene from branded food and drink products, as well as a further 1,300 tonnes it will remove as a result of the launch of paper carrier bags this month.

It is the latest in a series of moves by supermarkets to remove plastic from shelves and a further sign that doing so could increase sales.

In November. Thornton’s Budgens introduced 1,700 plastic-free products at its store in London’s Belsize Park. In March it claimed the store had increased sales by 4%.

Also in March, Tesco launched a pilot at its Extra stores in in Watford and Swindon, removing plastic packaging from 45 foods where loose alternatives were available. A wider rollout is in the pipeline.

But Morrisons claims to be the first supermarket to roll out entire plastic-free fruit & veg aisles at scale.

“Many of our customers would like the option of buying their fruit & veg loose,” said Drew Kirk, its fruit & veg director.

“So we’re creating an area of our greengrocery with no plastic where they can pick as much or as little as they like. We’re going back to using traditional greengrocery and we hope customers appreciate the choice.”