An impatient crowd gathered on the 220m precipice of Nevada’s Hoover Dam as glaring headlights pulled into view.

Cameras flashed and onlookers jostled to catch a glimpse of the world’s first self-driving truck, the Freightliner Inspiration.

With a flick of a switch the truck took control from its driver, travelled a few yards, then parked itself neatly along a cordoned-off section of the US highway.

This was in May 2015. Experts say commercial production of these autonomous trucks could be mere years away, a driverless future that has prompted bold claims about what a switch could mean for UK logistics. So what exactly are they predicting? Will robotic trucks be delivering groceries any time soon? And what stands in their way?

Ditch bogstandard HGVs for flashy driverless replacements tomorrow and savings across the haulage industry could reach £47.5bn over the next 10 years, AXA claimed in a report released last month. And fmcg could be one of the biggest beneficiaries.

According to Defra, HGVs travel a staggering seven billion miles across the UK each year transporting groceries, meaning logistics is a major cost for both manufacturers and retailers.

“Most of the journeys in the grocery supply chain are on multiple different kinds of roads, so in order to get wholesale adoption it needs to be flexible enough to use across the whole supply chain”

Pass all this cost-cutting on to the consumer and savings could stretch to the equivalent of a fortnight’s groceries each year per shopper.

It’s why they are the “logical next step” for the grocery supply chain, believes Phil Roe, MD of DHL’s manufacturing division, which partners with Lidl on its transport operations. Automated machinery including forklift trucks and cranes already help manage warehouses, he points out, and self-driving vehicles could slot in further along the supply chain.

AXA accepts it is unlikely automated trucks will be delivering groceries to a customer’s front door, but they could have a significant role transporting produce along major routes between distribution centres.

There’s “curiosity” among grocers about the potential, Roe adds, but reservations too. “Most of the journeys in the grocery supply chain are on multiple different kinds of roads, so in order to get wholesale adoption it needs to be flexible enough to use across the whole supply chain,” he says.

And a little more affordable, too. It would take a supermarket CEO with very deep pockets to splash out the “six figure sum” that David Williams, head of underwriting at AXA, predicts a single driverless truck would cost at the moment.

Yet tests are going on in the UK. Attempting to prove the robustness (and scaleability) of self-driving technology is a government consortium of 14 organisations called UK Autodrive. A collection of engineers, insurance specialists and lawyers, the group are road-testing the technology in both Milton Keynes and Coventry using £10m of public money.

Trucks aren’t high on their agenda, though. Proposals had been touted in 2014 to test the potential for autonomous HGVs using a convoy along major roads. One driver would sit in the front truck leading an entire fleet using technology that allows the vehicles to talk to each other. Plans for these pioneering platoons quickly had the media enthusing, but it all went quiet when the Department of Transport dragged its heels on giving the plans the go-ahead. The Department failed to respond to requests from The Grocer for an update.

The three-year project will instead focus primarily on driverless pods zipping along pathways at 15mph, and trialling early versions of self-driving cars in an attempt to beat Google at its own game.

All of which puts the UK behind not only the US but also Sweden, where Scania has been testing trucks since 2012, and Germany, where Daimler says it will road test its creation (albeit with a driver present at all times) this year. “We’re in the ever so early days of this,” says Miles Garner, marketing director at RDM Group. “Quite a lot of the press are talking about it as if it’s going to happen tomorrow, and it’s not. It’s a hell of a long way off,” he adds.

Even Daimler, creator of the pioneering Freightliner Inspiration, isn’t aiming to eliminate drivers yet. Instead it insists the truck allows drivers to take a break or multitask on the road, while remaining in the cab to take over at a second’s notice.

Williams admits nobody can agree on how long industry could be waiting. Predictions range from five years to two decades. The biggest challenge will be convincing governments, industry and the public the technology is safe. “People are worried about ceding control of vehicles to seemingly faceless and soulless machines,” says Stuart Young, head of automotive at law firm Wragge Lawrence Graham & Co.

Road accidents caused by human error (more than 90%, according to Global Driver Risk Management) would be eliminated by handing control over to machines, say experts. But government will want to see “a programme of testing” of this theory, says Williams.

There’s also the prickly question of the law. “Governments have been caught flat-footed by the technology leaping ahead quickly and the law not being ready for it,” adds Young.

Any industry that invests in driverless logistics could find itself inundated with “endless lawsuits”, the United Road Transport Union has warned.

“What does a self-driving truck do when it is unexpectedly hit by an object and loses control?” a union spokesman says.

“At the absolute worst extreme example, it veers left on to a footpath where a group of children are walking or veers right where a whole family are waiting to cross the road. If there’s a professional driver at the wheel, they would have to make this really tough decision in the moment,” he adds.

“But if a truck is powered by a computer algorithm, then these decisions would have been programmed into the computer in advance. Is anybody going to accept these pre-programmed decisions that decide the fate of a group of children or a family?”

The union has its own agenda, of course. Driverless trucks would necessarily mean fewer jobs for the 285,000 HGV drivers currently working in the UK.

AXA says labour represents the biggest potential saving of all if self-driving lorries become a reality, with costs cut by £1.5bn a year for logistics in the UK alone.

Williams thinks redundancies could be kept to a minimum, however. “The demographic fall-off and drivers retiring would compensate” for the majority of jobs lost, while new jobs would be created in warehouse logistics as a result of the complex technology,” he predicts. And the union doesn’t sound too concerned.

“Let’s wait and see what direction semi-autonomous trucks take us before we start worrying too much about that,” a spokesman says.

Fmcg likely shares a similar sentiment. And exciting as it sounds, it doesn’t look like the introduction of driverless fleets will be troubling their balance sheets, or their customers, any time soon. 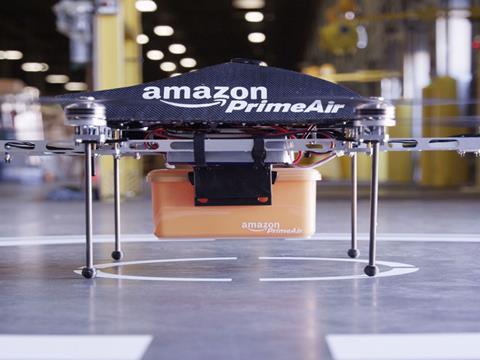 Take a look up 10 years from now and you’ll spot hundreds of thousands of robotic drones hurtling across the skies to a front doorstep near you. If Amazon has its way.

Using space age communications and sensing equipment to track their journeys, these high-speed aerial drones (flying at up to 60 knots) will be delivering packages to customers inside 30 minutes, the online retail giant predicts.

Notoriously tight-lipped Amazon broke its silence at a Nasa-funded conference in July to propose 200ft of airspace (between 200ft and 400ft above ground) should be reserved for the drones. Another 100ft above would be declared a no-fly zone to prevent collisions with manned aircraft.

The retailer accepts not all of these drones will be flying with an Amazon logo, but it has said it would want anything flying in the designated airspace to be able to ‘talk’ and collaborate with fellow drones, use sensors to bypass birds and buildings and use online flight planning to map a route.

So sophisticated would be the technology, the retailer envisages humans only taking over control of the machines in emergencies.