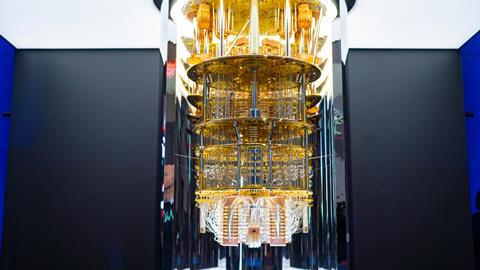 From delivery routes to world hunger, can cutting-edge quantum technology help solve the biggest challenges in food and drink?

Spooky action at a distance” is how Albert Einstein described quantum entanglement, one of the strange phenomena of particle physics that, years after his assessment, is now forming the basis for an entirely new form of computing.

It’s a far more complex iteration of the computers we use today, which represent information in binary bits – for example, on/off, 0/1. A quantum computer uses entangled quantum bits (or qubits) which can be both on and off at the same time – another spooky quality, known as ‘superposition’. That means many computations can be performed in parallel. When fully realised, that quality will give quantum computers a huge speed advantage over ‘classical’ computers in solving certain problems.

Herein lies the huge potential of quantum computers like IBM’s Q System One (pictured above). As theoretical physicist John Preskill puts it: “Giving a complete description of all the correlations among just a few hundred qubits may require more bits than the number of atoms in the visible universe.”

Branded a “totally mind-bending machine” by Microsoft, the quantum computer promises to be incredibly good at solving many of the gnarliest challenges in business today – including in grocery.

So what can quantum computing do for the sector? Is it too soon to experiment? And how can grocery companies take advantage?

Quantum computers are expected to be particularly good at optimisation problems – when given all the feasible solutions, it works out which one is best. That’s useful for grocery retail, which is full of such problems. Like displaying goods, and how to “find the best possible use of sites, spaces and resources”, explains Sara Felloni, quantum and accelerated computing lead at Data Reply.

Dr Edmund Owen, senior quantum physicist at Cambridge Consultants, reiterates the point. “One of the greatest ongoing challenges in retail is how to get perishable goods to consumers quickly and efficiently, minimising waste and carbon footprint,” he says. “Quantum computers are fantastic at solving these difficult optimisation problems.”

The routing of delivery drivers is an especially ripe problem for quantum computers to tackle. Known as the ‘travelling sales problem’, it requires finding the most efficient route when all drop-off locations are known. Volkswagen and quantum machine maker D-Wave are working on the problem, applying it to public transport and taking into account live traffic conditions.

That’s something only a quantum computer could realistically do. “When you get to a few dozen locations, the combinations are too immense even for the world’s fastest supercomputers,” says IBM’s Riel. Take maritime shipping. Involving 50,000 merchant ships each carrying as many as 200,000 containers to hundreds of ports, the logistics would overwhelm the huge computers of today.

“In order to improve efficiencies in a system this large and complex, a computer would have to examine every single container, on every stop of every route of every ship to find the optimal configuration. That’s a trillion billion different permutations of containers, ships, routes and ports,” Riel explains.

But a quantum computer could potentially find the best shipping route in a reasonable timeframe. Indeed, IBM and ExxonMobil are confident one will, in February unveiling their progress to date on “taming the monster”. 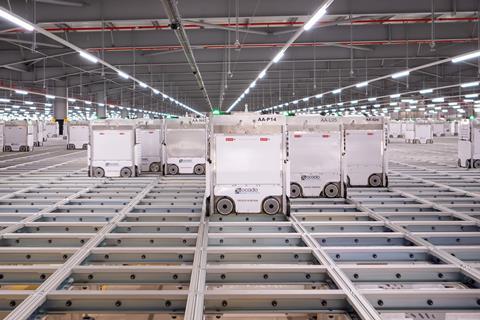 Ocado’s CFC robots traverse huge grids, picking up products and dropping them into totes. Each robot must find a path to the next item on the list – the shorter the better – and avoid colliding with another bot on the grid.

There are high-traffic areas around popular products to contend with, and loitering must be kept to a minimum for the sake of efficiency.

All of these intricacies make it an ideal problem for quantum tech to solve. With that in mind, Ocado has partnered with Canadian company D-Wave, using its quantum machine to find “the optimal combination of paths” for the bots.

Whether the method beats standard computers is yet to be determined, but this form of quantum annealing “is promising and has potential for routing a large number of robots in real time”, Ocado and D-Wave engineers concluded in a paper published last year.

Quantum computers are also touted for their ability to “efficiently simulate any process that occurs in nature”. They could find a cheaper and easier Haber-Bosch process that makes fertiliser, leading Microsoft to pose the question: could a quantum computer help solve the challenge of world hunger?

Nestlé certainly believes there is a possibility. It has long been researching quantum mechanics to help develop foods with optimal levels of stability, nutrients, flavour and aroma release.

Still, these projects are still very much in their early stages. Commercial efforts in quantum computing have so far been focused on proving the machines could solve the problems posed, rather than actually solving them, due to the nascent nature of the technology.

One issue is that qubits are very fragile and lose their quantum state quickly. To counter this, they are often kept at sub-zero temperatures, or in vacuum chambers. Furthermore, the infinitesimal heat and vibrations from the elements that read and control the qubits can create too much ‘noise’ for them to operate. That means even the most bullish expect a stable machine to be at least a decade away.

“Most grocery use cases are likely to be met over the next few years by the natural advances in classical computational performance and algorithmic efficiency. And classical computing is available in very large quantities, whereas the scalability of quantum computing is yet to be determined,” says Jeremy Rossell, retail technology director at Deloitte. The tech “may allow grocers to make small but material improvements in specific areas, but it’s unlikely to change the game overnight” he adds.

But that doesn’t necessarily mean the sector should wait and see. While grocers have a lot on their plate already, they must “keep an eye” on developments, maintains Linda Ellett, KPMG’s UK head of consumer markets for retail.

Indeed, breakthroughs could come quickly and investment is flooding in. In March, quantum business IonQ announced plans to go public (via a ‘special purpose acquisition company’) with a market cap of $2bn.

It’s the first company in the field to do so, and could pave the way for more such developments. IDC predicts that by 2023, 25% of the Fortune Global 500 will gain competitive advantage from quantum computing. According to McKinsey, the technology will have a global market value of $1tn by 2035.

Grocers are already striking up partnerships with specialist companies. Ocado has partnered with D-Wave to route its CFC robots, and Canadian grocer Save-On-Foods is working with the company on an undisclosed optimisation problem in its operations – one the supermarket’s VP of digital and analytics Andrew Donaher says “we’d never been able to solve before in our history, and had been tried several times”.

Before partnering, grocers can get to grips with quantum algorithms and let their data teams loose on the quantum code languages and cloud computing options on offer from the likes of IBM, Amazon and Microsoft.

“As an absolute minimum, grocers need to make sure someone in their business is ‘regularly reviewing risks and opportunities from quantum’ in their objectives and include it in the risk register and strategy reviews,” KPMG’s Ellett says.

As Riel puts it: “If you wait until full maturity you will always be catching up to the competition. Going back to my analogy, would you want to be the last grocery company to have an online retail shop?” 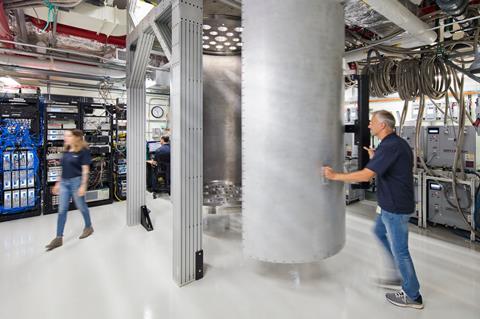 The likes of Boeing, Daimler, Samsung, JP Morgan and Goldman Sachs are working with IBM on several quantum projects. This month, IBM scientists demonstrated a 120x speed-up in simulating molecules on its quantum computer. 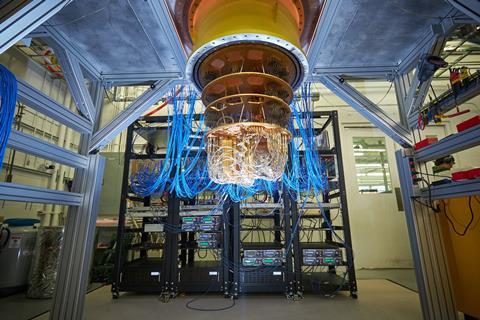 In 2019, Google’s quantum machine solved a sum in 200 seconds. A sum that Google said would take the world’s fastest supercomputer 10,000 years. Its capabilities attracted  Boehringer Ingelheim as a partner in January. 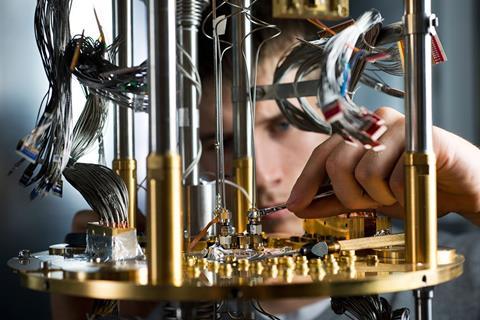 The Canadian company’s machines are different to its competitors, being ‘quantum annealers’, built for specific types of problems. But they’re already tackling real-world challenges for Ocado, Save-On-Foods, BT and Volkswagen. 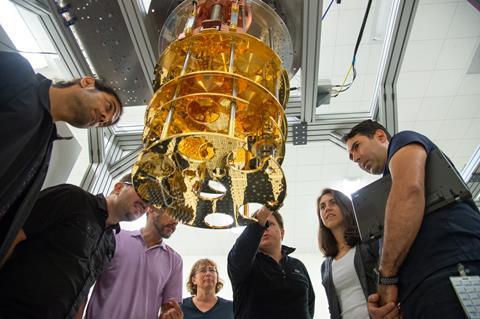 Keen to take quantum tech “from the lab to commercial reality”, in December Intel launched a chip – Horse Ridge II – to control qubits. Crucially, it functions within the cryogenic refrigerators qubits must run in. 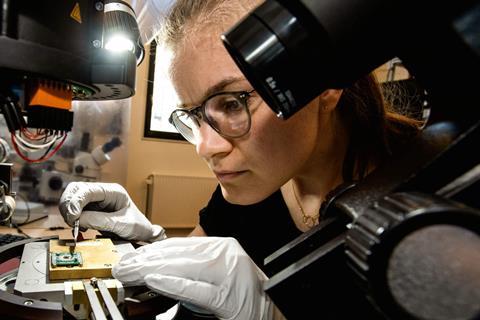 The tech giant’s approach focuses on ‘topological qubits’ using peculiar quasiparticles some still doubt actually exist. But their potential robustness against decoherence, which dogs other approaches, could prove advantageous.