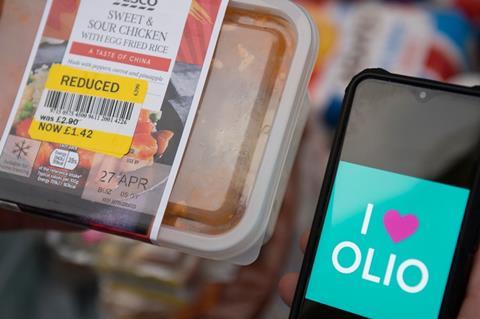 Tesco’s partnership with Olio has prevented over five million surplus meals from going to waste in the past year alone – the equivalent to 196 London double decker buses.

The retailer first joined forces with the food sharing app in August last year to provide unsold food to families across the country.

The partnership’s first full year redirected around 5.6 million unsold meals from Tesco stores to over 72,000 people with the help of Olio’s network of 3,700 ‘Food Waste Heroes’.

“Tesco is committed to tackling food waste and we were confident our partnership with Olio would help with that, but its impact has exceeded all our expectations,” said Tesco’s head of communities, Claire De Silva.

“For our partnership to have diverted more than five million surplus meals from going to waste in its first year is a huge achievement and shows the strength of the partnership between our store colleagues and Olio’s Food Waste Heroes.”

Olio’s Food Waste Heroes collect products for the charities supported by food distribution charity FareShare when they are unable to do so.

They then upload the items onto the Olio app so that those in need can place their requests and pick them up from an agreed, nearby contact-free collection point.

The food sharing app’s co-founder, Saasha Celestial-One, said the company was “incredibly proud” to have been able to deliver meals that would have otherwise gone to waste to communities struggling with food security, but that the work was “far from done”.

“We hope this partnership encourages other businesses to follow suit and consider how they can take a more proactive approach to minimising waste and supporting local communities.”

Tesco has had a food surplus donation scheme in partnership with FareShare since 2016.

According to the supermarket, that programme has provided over 120 million meals to charities and community groups throughout the UK.

It said it had not sent any food waste to landfill since 2009.