Strategic responses to the Tesco-Booker deal

For those of us involved in wholesaling, 2017 was a year when the tectonic plates of the industry moved suddenly and decisively.

While Tesco-Booker still has to be ratified by shareholders, and the intervention of activist Booker shareholder Sandell is an interesting diversion, most within the industry are actively considering their strategic response. Symbol groups, fascias and own brand are likely to be high on the list of considerations. 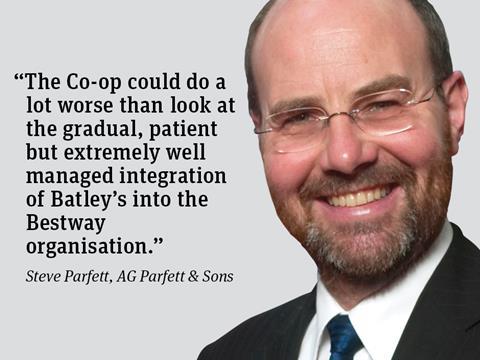 Post Tesco-Booker there will be one grocery market, as opposed to the uneasy truce of a two-market separation of retail & wholesale following the 2008 Competition Commission enquiry.

Assuming it is not blocked by the CMA, Co-op Nisa is already exploring future options. It appears that, ultimately, Co-op will be the brand sold by the combined organisation, with the successful Heritage brand a likely casualty. This promises interesting challenges as an organisation used to being in direct control of the brand puts its reputation in the hands of independent operators. There are already questions about pricing, and what happens when safeguards fail and out-of-condition product is sold in a franchise or symbol store remains unclear.

It seems to me the Co-op brand may no longer be an own brand in future but a hybrid between that and a true brand. How quickly such changes take place will be a fascinating challenge. The Co-op could do worse than look at the gradual but extremely well-managed integration of Batleys into the Bestway organisation.

Equally interesting is the role of the Safeway name. A brand with strong recognition seems to be searching for a role in Morrisons’ attempts to catch up on convenience and wholesale opportunities. McColl’s apparently has exclusivity for 12 months, but thereafter it will be in more general distribution. Might Safeway become a more successful fascia than M Local and, if so, will that be as a managed chain, franchise or symbol?

Franchising and joint ventures are having a mixed experience, with Sainsbury’s ditching its Euro Garages experiment, while Conviviality picks up one of the few saleable parts of P&H in Central Convenience Stores with the declared intention to franchise them all.

What brands will Tesco feature in its mooted new hard discount chain? Apparently, we will see the Tesco brand in independent stores, if only in the context of click & collect pick-up, but might this extend further? What future for Budgens own brand, Family Shopper and Euroshopper?

All that without mentioning Asda and Amazon, and how the further blurring between retail and foodservice might play out. Tectonic shifts indeed.