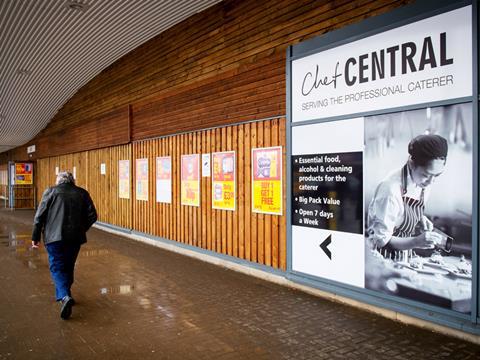 Tesco is understood to be planning a nationwide rollout of its Booker cash & carry concept, Chef Central, after trials at its launch store in Cambridge proved a hit with customers keen to buy discounted products in bulk.

Sources have told The Grocer that managers at more than 250 Tesco Extra stores have been asked to identify potential spare space, on average 10,000 sq ft, to make way for an expansion of the Costco-style operation.

They said Tesco’s ambition for the rollout had been given extra impetus by the proposed coming together of Sainsbury’s and Asda, which, if successful, could pave the way for the possible expansion of hundreds of Argos stores across the UK.

While it is aimed at a different sector, Chef Central is seen as a way to utilise excess space in Tesco’s larger stores and give shoppers an extra reason to visit out of town stores, facilitating capital-light expansion for Booker.

A source said: “It makes sense from a cost point of view for Tesco and Booker to pursue these synergies and they are very mindful of what is going on with Argos and the potential for that to go into overdrive.

“There is of course more potential for cannibalisation than Sainsbury’s and Asda have with Argos but Tesco seem very excited about the potential.”

The first Chef Central concept store opened in the Bar Hill Tesco in February, stocking large packs of catering products. While it was billed as a store for the catering trade, Tesco believes the concept will also appeal to a wider audience looking to stock up on bulk products, despite the minimum £30 spend.

Products on sale include packs of bottled water, other soft drinks, toilet roll, as well as a limited range of alcoholic drinks and cooking staples such as rice and sauces in large discount packs.

Tesco’s interest in the bulk buy market comes as its new UK chief executive and former Booker boss Charles Wilson is looking to ramp up the crossover in sales and synergies between the two empires following the merger with Booker in January.

Tesco own-label lines are due to be rebadged and rolled out in Booker’s symbol stores, including Budgens, Londis and Premier, while Tesco has replaced the Brand Outlet aisles in some of its stores with discount products from Booker.

Tesco CEO Dave Lewis has also said Tesco would look to combine deliveries for Chef Central customers with Tesco’s online grocery deliveries, which sources say would make more sense if it was not limited to deliveries from Booker depots.

Bryan Roberts, global insights director at TCC Global, said the Barr Hill store was very much a toe in the water for Tesco, having been announced before the takeover actually went through.

“Despite a lot of the larger Tesco stores being adapted to carry the Arcadia brands and Holland & Barrett, there is a still scope for quite a lot of these bigger Extra sores to be downsized, particularly those that are on a single floor.

“You only have to look at the Costco model to see the appeal of this sort of store, with shoppers going crazy for big bags of nappies and toilet rolls.

“There is definitely an appetite there if they feel plan to roll this out.”

Roberts also pointed to the success of Carrefour in launching a cash & carry style hypermarket chain Atacadão in Brazil, a concept which has since been rolled out in Spain and Romania.

A Tesco spokeswoman said: “We are very happy with customer reaction to the concept store in Bar Hill. This merger has always been about growth, bringing together our complementary retail and wholesale skills to create the UK’s leading food business.”