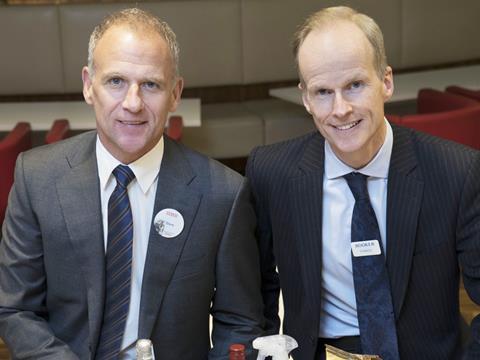 Tesco is calling on suppliers to its newly acquired Booker wholesale business to slash prices, in return for a share in a projected £2.5bn sales growth bonanza.

Five weeks after its £3.7bn merger with the wholesale giant, Tesco revealed its new UK CEO Charles Wilson and chief product officer Jason Tarry had already confronted its 39 biggest suppliers over “anomalies” in their price files, with many currently providing products cheaper for £47bn-sales Tesco than for £6bn-sales Booker.

Tesco’s so-called Joining Forces team has started talks with its biggest suppliers, but says it will move on to have discussions with other smaller companies, who will be urged to consider the longer-term benefits of big increases in sales volumes in return for more competitive pricing across the merged entity.

Suppliers search for clues as Tesco-Booker hints at future strategy

The move follows fears expressed before the takeover went through, from some suppliers and wholesale bosses, that Tesco would put the squeeze on suppliers if the merger went ahead.

However, Tesco CEO Dave Lewis said it made sense for companies to offer more competitive prices, in return for a share of a huge growth opportunity. Tesco was expecting to grow its revenues by an additional £2.5bn by integrating Booker in the medium term, he said.

He added: “We will take the same approach throughout our supplier base but clearly we are starting with our biggest suppliers.

The idea is very much to focus on the bigger, holistic growth opportunity.”

Lewis said Tesco was urging suppliers to change their models to supply the new business, adding that reductions in price would be made up for by increased volume. “When I was at Unilever, Tesco were by far and away the toughest partner in terms of negotiation,” he told analysts. “They got the best deal but they were also my most profitable customer because I was able to change my business to work with them more efficiently.”

“If I [were] a supplier I’d be sitting down thinking ‘how can I align my plans with the opportunities that business affords me and how can I change my business to work with that more efficiently and better?’” he said.

Tesco also confirmed plans to rebadge Tesco own-label lines in Booker’s symbol stores, including Premier and Londis, to fill gaps in its range, following a trial of 30 SKUs including ready meals.

Meanwhile a Tesco store in Cambridge has trialled stocking large packs of catering products in a section called Chef Central.Some experts believe Tesco will look to roll out products from its recently launched raft of tertiary own-label ranges, to Booker operations.

Retail consultant John Butler said the developments with Tesco and Booker presented both opportunities and challenges for suppliers.

He said: “Any supplier in the top 200, let alone the top 39, which has not been preparing for crunch talks on price with Tesco from the moment the Booker merger was announced wants shooting.”