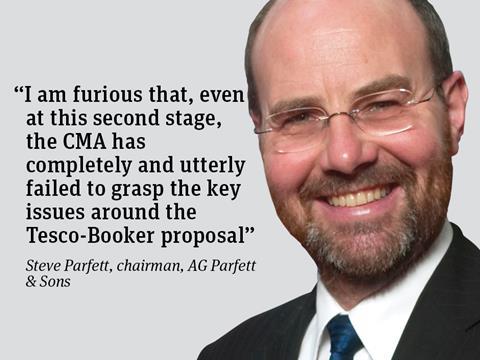 Last week the CMA released its “issues” paper, together with a new questionnaire to wholesalers, as the latest stage in phase two of the Tesco-Booker inquiry. I am furious that, even at this second stage, the CMA has completely and utterly failed to grasp the key issues. The paper identifies three “principal ways in which the merger might harm competition” and two secondary ways, which it states will not be the main focus of inquiry.

The three principal ways are simply a straight copy of issues in less complex inquiries, dealing with classic horizontal effect theories of harm, which in this case are so trivial as to be laughable. First is the theory that stores owned by Booker may compete less effectively with Tesco as a result. The CMA admits there are only two such stores to which this might be relevant, and the thought that two Budgens stores might be in a tooth and nail fight with Tesco is ludicrous: Booker has no desire to run its own stores, and its current ownership is a timing issue in a franchise model.

The second is that Booker, under Tesco’s influence, might worsen its service to symbols or independents to lessen competition for Tesco stores. Given the price advantage that will be achieved by Booker, together with the fact Tesco wants to acquire a successful wholesale business, this is also ridiculous. Booker’s model relies on a consistent package for each of its symbol fascias; to disadvantage a few stores to help Tesco would destroy this important part of its strategy. In a mirror image, the third theory is that Tesco might worsen its offer in its stores to advantage Booker’s independent customers - a possibility that even the most ill-informed observer would regard as impossible.

Theory four (secondary) is that competition might be substantially lessened in delivered wholesale. This is an understatement of the true position: massive damage to the entire wholesale sector, not just delivered - but also, mindbogglingly, it goes on to imply that the CMA’s only concern is for Palmer & Harvey.

For the Authority to concentrate on one commercial operator when a whole market sector is at risk must surely be the antithesis of the purpose of the CMA.

Theory five (secondary) is the only one the CMA has got right, and is that the increased concentration of buying power at Tesco-Booker may result in a loss of competition to the detriment of the consumer.

The three primary issues are a gift to Tesco-Booker. A few insignificant concessions will be sufficient to wave those through. The two secondary issues are so fundamental as to determine the whole future of grocery in the UK in general and wholesale in particular. I can’t believe that a body with the stature and importance of the CMA has performed so inadequately.

The sector needs to stand up and tell them so, not least because the analysis is so poor that a future appeal or judicial review would drive a coach and horses through its thinking.