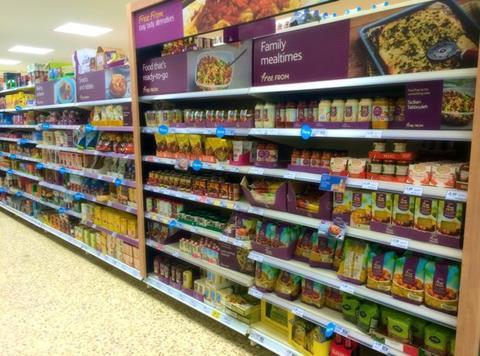 Tesco is setting out to transform the shopping trip with major changes to the layouts at 900 of its stores.

Under the move, the retailer is ramping up the focus on its own label range, which it said would see an increased presence of up to 14% on the shelves, with Tesco’s smaller stores in particular seeing a marked reduction in the emphasis on brands.

It is also making sweeping changes to the adjacencies of many grocery sectors, bringing together types of foods it said would help customers shop by meal occasion rather than individual products.

Other features of the revamp include a much bigger emphasis on the free from category, which will be bolstered by up to 40%, and Tesco said it would also be putting a greater focus on health products.

The move is the latest round in its Project Reset strategy and has already begun at some stores, having started in a trial at its Baldock store in Hertfordshire. Tesco said that over the next few weeks the changes would be rolled out across much of its Metro, superstore and Extra estate.

“These are really significant changes which will make a big impact on the way people shop,” said a Tesco spokeswoman.

With brands having already been the subject of a brutal range reduction under the first phase of the reset masterminded by CEO Dave Lewis, the moves will further increase the pressure on shelf space.

The spokeswoman said: “We are going to change the hierarchy of the fixtures with own label at the top. Previously there have been times when our own label products have been almost an apology.

“We want to stress the great quality of our own label produce as well as the affordability.”

Tesco is also pulling together items in new cooking zones, including savoury scratch cooking (canned tomatoes, pulses, herbs and spices). Many of these items, such as pasta and tomatoes, were previously sometimes several aisles apart. It is doing the same for store cupboard staples (canned veg and meat), convenience cooking (rice, pasta and cooking sauces) and sweet scratch cooking (home baking and eggs).

“The aim is to build on the great work that’s been achieved by the first phase of the reset,” said the spokeswoman.

“Previously the focus has been to simplifying the range, getting the balance right between convenience and choice, and improving availability.

“We’re now taking it a stage further and looking at how we can enhance our customers’ shopping experience in the grocery aisles.”

One supplier said Tesco had reported the trials had seen sales uplifts so far of 2% to 3% because of the changes, although it hoped that would increase as consumers became more familiar with the changes.

“That sort of uplift is quite a significant amount when you are somebody of Tesco’s size,” he said. “They are really pushing the Tesco brands. They see it as a real point of difference, alongside really pushing on areas like grains and free from. Personally I’m not sure this is the great revolution they have billed it as, but Tesco does seem to be the one retailer out of the big four that really knows where it’s going at the moment and this is another step in the right direction alongside better availability, service and more competitive pricing. The rest are running around like headless chickens.”