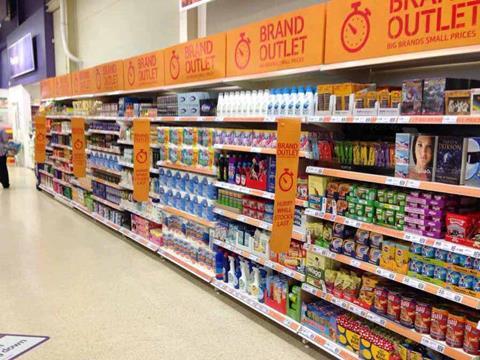 Tesco has trebled the number of stores with dedicated discount aisle Brand Outlet in the past eight weeks.

The Grocer revealed in May that Tesco aimed to take a chunk out of the growing pound store market with a major in-store marketing drive for Brand Outlet.

This week, a Tesco spokesman confirmed: “We’ve been offering a discounted range in 60 of our stores for around 18 months. We know how much customers appreciate our help in making their budgets go further, so we’re pleased that we have been able to introduce this range to around 180 stores.”

Tesco has plans for up to 285 Brand Outlets, The Grocer under­stands, with the concept being rolled out recently to stores in Portsmouth, Manchester and Nottingham.

Brand Outlet covers a range of groceries, petfood, beauty goods and household products, including brands such as Surf, Persil and Tetley. Prices range from about 30p to £2.50, with many items priced at £1.

Tesco is also understood to be considering ways to launch the concept online. “We are increasingly looking at multichannel options for our propositions but don’t have an online solution for Brand Outlet currently,” said a spokeswoman. There is speculation Tesco could use its so-called dark stores, based around the M25, and large stores used for dotcom picking in other parts of the country, to sell the goods online.

Tesco store managers have been using social media to drum up trade for the offer. One said he “could not wait” to take on the pound shops.

However, single price discounters have downplayed the threat.

“They look horrendous,” said 99p Stores’ buying chief Faisal Lalani. “The reaction that I’ve had is that the Brand Outlet aisles are ugly and look to have been dressed down to appeal to a certain audience.”